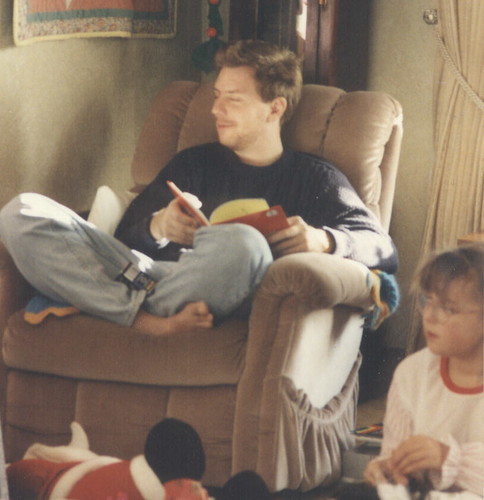 Right before Christmas, Nana passed away. That changed plans for my parents, who were planning on traveling to Iowa to visit Patty and her family for Christmas. I do not recall if I was originally going to go to that or not, but with Nana’s funeral scheduled for 22 December in Pennsylvania, I know I was with my folks there. We carpooled out talking on CB radios as we went. Ah, the pre-cellphone days. I had Britches, the hamster, in tow. We couldn’t stop too long in rest areas or the damn thing would have died. Britches turned out to be my gift to Ricky. That and the miles of Habitrail I had.

Britches was a murderer. I had purchased a hamster to keep me company during my first year teaching. I was working so much that I was rarely home. When I was, it was lonely. I had almost no furniture and I didn’t even get cable television until February, when I was home ill for a week and bored silly. Anyhow, that first hamster was home alone every day. I figured he would want a buddy. I bought Britches. Britches bit off the first hamster’s willy and he died. I later learned that hamsters aren’t social beings, particularly two males.

When ‘Nado arrived, it was interesting to see how a cat and a hamster interacted. Britches constantly got out of his Habitrail, so he would roam about the apartment. ‘Nado, since she came after Britches, thought Britches was part of the family. She was very good at pointing out where the rodent was, but she never attacked him. I always found that remarkable.

Anyhow, Britches smelled and I didn’t like taking care of the bedding. It seemed like my nephew would enjoy a pet. 🙂

This was the Christmas I was nicknamed Uncle Bump. It is still used. Thanks, Parker. 😉

The above photograph shows me reading Green Eggs and Ham, a gift from Ricky. It has gotten a lot of use since then.

My gift to Patty that year was her first Internet subscription. I got her a local access account and created a web site for her and her family.

I recorded Dad’s voice out here. I have no idea where that file is. 🙁

While I thought I visited Iowa twice, Patty thinks it was just once. If so, on my way back is the only time I had ever been to Michigan until recently when I had a layover in the airport. My trip to Michigan was not planned. I remained straight on the highway. Apparently, somewhere around Chicago once needs to turn to remain on the correct highway. When I saw the “Welcome to Michigan” sign, I knew I had done wrong. I got onto the CB and the truckers re-directed me. I think I spent about a half hour in the state. 🙂

Christmas dinner (or perhaps Dad’s birthday) was prime rib. I was impressed.

I had begun brewing beer by this time. I recall giving Bill a six-pack right before I left. I suspect I brought some with me on this trip too.