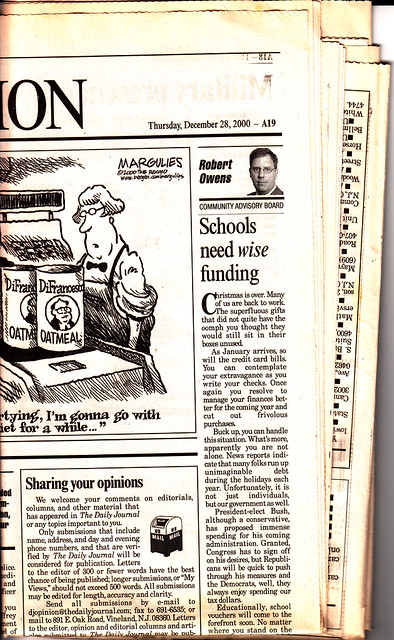 Originally published in The Daily Journal on 28 December 2000.

Christmas is over. Many of us are back to work. The superfluous gifts that did not quite have the oomph you thought they would still sit in their boxes unused.

As January arrives, so will the credit card bills. You can contemplate your extravagance as you write your checks. Once again you resolve to manage your finances better for the coming year and cut out frivolous purchases.

Buck up, you can handle this situation. What’s more, apparently you are not alone. News reports indicate that many folks run up unimaginable debt during the holidays each year. Unfortunately, it is not just individuals, but our government as well.

President-elect Bush, although a conservative, has proposed immense spending for his coming administration. Granted, Congress has to sign off on his desires, but Republicans will be quick to push through his measures and the Democrats, well, they always enjoy spending our tax dollars.

Educationally, school vouchers will come to the forefront soon. No matter where you stand on the issue, the inclusion of federal tax dollars into public education is never a good idea. Additionally, Bush plans to establish a $3 billion technology fund for schools to purchase computers and other devices, $5 billion for reading programs for elementary schools, $500 million for schools that “improve” student performance, $2.4 billion for states that put together teacher-accountability programs, $30 million to re-train military personnel to educators, and vouchers for schools to enact after-school programs.

Unless the staff is trained, computers are dust collectors. Bush’s reading program is to ensure all students can read by third grade. Is it not obscene what elementary schools currently spend cannot guarantee that result now?

Merit pay for schools sounds nice. Methinks, however, it will produce more money for schools already making the grade, thus increasing the gap between the rich and the poor. If public education works under a system that does not currently have teacher-accountability programs, then there should be an outcry over what districts spend on observations and evaluations.

So, as you shake your head at the numerous charges from Toys ‘R Us, Best Buy, and Wal-Mart, resolve to do better in 2001. But also resolve to hold our elected officials to the same frugality. We do not need our government wasting our hard-earned money on feel-good measures that are not likely to fulfill their objectives.

Prediction for 2001: Recession will set in by summer. Can we afford to squander all this on a matter that is but a state responsibility?

I hear some people
been talkin’ me down,
Bring up my name,
pass it ’round.
They don’t mention
happy times
They do their thing,
I’ll do mine.