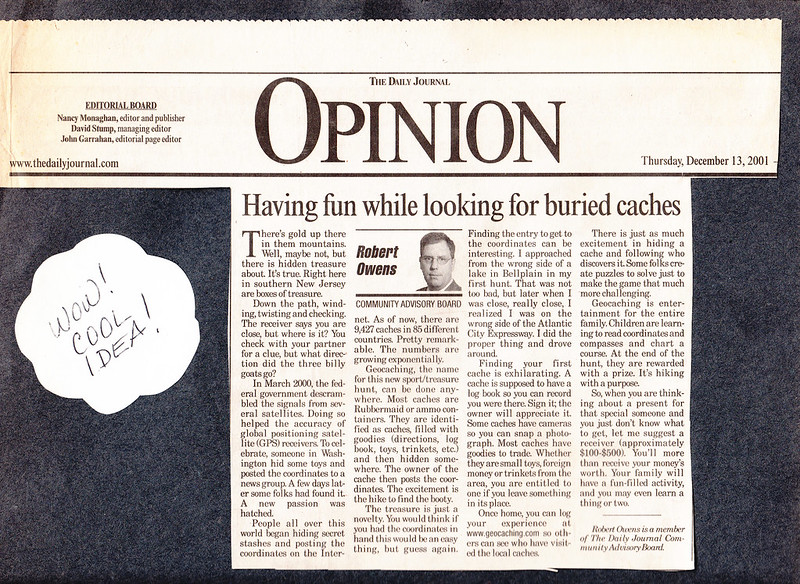 Originally published in The Daily Journal on 13 December 2001.

There’s gold up there in them mountains. Well, maybe not, but there is hidden treasure about. It’s true. Right here in southern New Jersey are boxes of treasure.

Down the path, winding, twisting and checking. The receiver says you are close, but where is it? You check with your partner for a clue, but what direction did the three billy goats go?

In March 2000, the federal government descrambled the signals from several satellites. Doing so helped the accuracy of global positioning satellite (GPS) receivers. To celebrate, someone in Washington hid some toys and posted the coordinates to a news group. A few days later some folks had found it. A new passion was hatched.

People all over this world began hiding secret stashes and posting the coordinates on the Internet. As of now, there are 9,427 caches in 85 different countries. Pretty remarkable. The numbers are growing exponentially.

Geocaching, the name for this new sport/treasure hunt, can be done anywhere. Most caches are Rubbermaid or ammo containers. They are identified as caches, filled with goodies (directions, log book, toys, trinkets, etc.) and then hidden somewhere. The owner of the cache then posts the coordinates. The excitement is the hike to find the booty.

The treasure is just a novelty. You would think if you had the coordinates in hand this would be an easy thing, but guess again. Finding the entry to get to the coordinates can be interesting. I approached from the wrong side of a lake in Belleplain in my first hunt. That was not too bad, but later when I was close, really close, I realized I was on the wrong side of the Atlantic City Expressway. I did the proper thing and drove around.

Finding your first cache is exhilarating. A cache is supposed to have a log book so you can record you were there. Sign it; the owner will appreciate it. Some caches have cameras so you can snap a photograph. Most caches have goodies to trade. Whether they are small toys, foreign money or trinkets from the area, you are entitled to one if you leave something in its place.

Once home, you can log your experience at geocaching.com so others can see who have visited the local caches. There is just as much excitement in hiding a cache and following who discovers it. Some folks create puzzles to solve just to make the game that much more challenging.

Geocaching is entertainment for the entire family. Children are learning to read coordinates and compasses and chart a course. At the end of the hunt, they are rewarded with a prize. It’s hiking with a purpose.

So, when you are thinking about a present for that special someone and you just don’t know what to get, let me suggest a receiver (approximately $100-$500). You’ll more than receive your money’s worth. Your family will have a fun-filled activity, and you may even learn a thing or two.

One thought on “Geocaching in South Jersey: A Global GPS Stash Hunt”