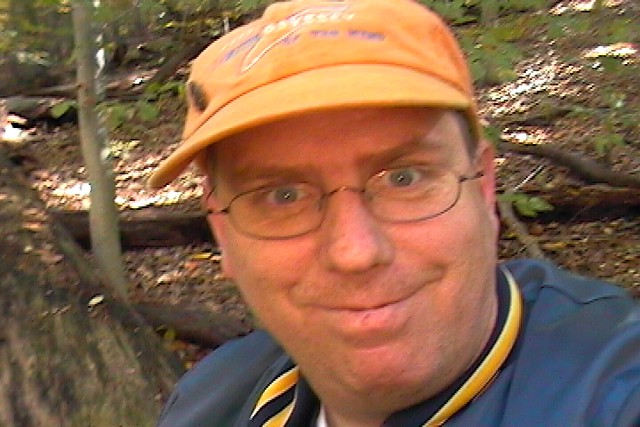 I thought I would zip in, hit these four caches and be on my way. It didn’t happen that way at all.

This area was screwy with coordinates. When I first pulled into the parking lot (which was an adventure finding) my GPSr was showing I was still 3/4 of a mile away from the lot.

Then I didn’t read the directions well. Lenape Cut-Off is different from Lenape Trail. I do not know how much that added, but I walked forever. I finally cut across on another trail.

Throughout the entire time I was here, coordinates were bouncing every which way. On my way I rolled my left ankle. It still hurts.

I finally found stage one of the multi. By this time I was quite confused as to where I was. This would prove detrimental later on.

I headed out for stage two. More coordinate jumping. Finally zeroed in on it. Headed off for more, then realized State Quarters was closer. I found that rather easily, but had a bit of a tussle getting the cache. Logged my find, then headed out again for the multi.

Along the way I ran into Jill. Actually, she spotted me . . . I was trying to move away so as not to draw attention. We chatted a bit. Grizzly is cute.

Moved on to the final stage. I guess I was impatient as I bushwhacked my way across. I was held in a thicket for a bit. It took off my cap and I had to move branch by branch to free myself. I criss-crossed the creek a few times. Coordinates were jumping. I finally found the thing.

Thanks for the challenge.

Long is the road
We must travel on down.
Short are the legs
That will struggle behind.
I wish I knew for sure
Just where we’re bound,
What we will be doin’
And what we’re gonna find.
Wherever we go, there will be birds to cheer you
Flower to color in the fields around.
Wherever we go, I’ll be right here near you
You can’t get lost when you’re always found.

— John Perry Barlow, I Will Take You Home