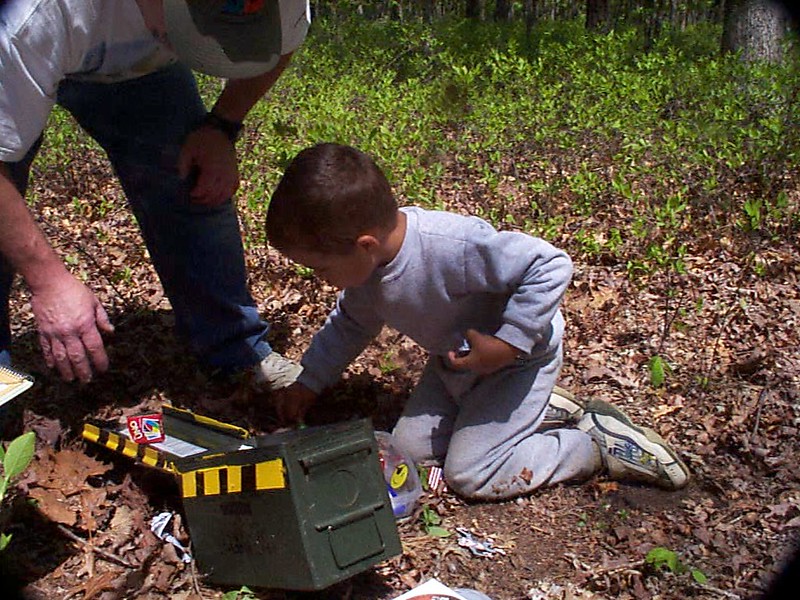 Hmmm . . . e-mail from GC.com has been slow the last 24 hours. I awoke early for I had changed my plans. I thought I would head over and do this new murder mystery. I got to Union Lake at about 7:15 AM, parked along the side of the road, and began the trek. I found the murder scene and headed off for the second stage. A turkey carcass and feathers were nearby. I read the description of what was to be and headed off.

I picked up the first four clues without a hitch. I really thought I could find the evidence box based on those numbers, but when I saw the last two were so close, decided not to risk it and went and got those them as well. Sure enough, I would have been able to have gotten to the evidence based on the first four clues. Along the way through the six suspects, I was pretty certain as to who it was going to be.

When I got to the evidence I was a bit perplexed. The evidence did not eliminate anything.

Nevertheless, being certain of who (I was able to eliminate four of the six outright. I knew one was lying and therefore eliminated the other) committed the crime and had a pretty good idea as to the weapon.

I headed to those coordinates. I searched and I saw nothing. Hmmm . . .

Back I went to the evidence. Surely I had missed something at the evidence. Nope. Perplexed, I decided to take all the coords for this cacher with me. As I headed for the second, I ran into another cacher. He had worked this out independently of me. We compared notes and we both agreed. He had actually gone home to read some logs. Well, we circled all six caches twice and then one or two a third time. Nope, nothing.

I deciphered what I thought was a bonus cache, but there seemed to be problems with that. The stated coords put one in the Atlantic Ocean. We thought about that a while. If there had been a typo (it looked like there may have been one) then it was less than a mile away. I could not rectify the tree in Malaga. But then again, there were no briars near the crime scene and I hadn’t found a cache either. Hmmm . . .

We headed over to those coordinates and while we were there, couldn’t find a cache there either.

Frustrated, we returned to the evidence. We jotted down all the coordinates. The plan was to put them all in the GPSr and see what it looked like. We were about done and ready to pack it in for the day when we ran into the Guenthers. We compared notes. It seems like more than one suspect lied on the interview.

With that information, we were able to find the ammo box.

I was at the first cache I thought it was at in 75 minutes. I found the ammo box at six hours forty-five minutes. While I could have come home to check things through more thoroughly, there was no expectation that more than one person could lie on the interview. I’m a bit bummed that it took so long.

I thought it was a very well-planned mystery, but I think the nuances to the solution are a little bit of a stretch. In conversations with the owner, to truly solve this thing in its entirety, one needs to have read the logs of a members’ only cache. That rules out most people.

Also, given that this is based on actual cache experiences, the one who did it has an advantage in that he knows the nuance needed.

I don’t want to dump on this because it was a very good cache. Other than the wrinkle that may only effect stonewall and me, this was outstanding. In our wanderings stonewall and I discovered a marker. It was pretty neat. It was placed in 1930s and seems to mark Cumberland County (or Millville) and Deerfield. We also spotted a very plump wild turkey.

Every time I think about back home
It’s cool and breezy
I wish that I could be there right now
Just passing time.

— Neil Young, Everybody Knows This Is Nowhere