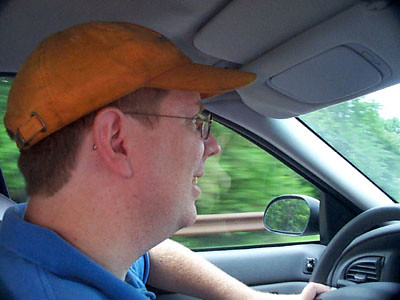 Yesterday, during a respite in our busy visiting, I fired up the laptop and looked over the caching ahead. Shoot! I had missed two caches on the GSP on the way up. But there was the Montvale and another on the way home that could be had. It turns out there was a third that had been approved, but I knew nothing of it.

Gert and I had stopped in Connecticut for a quick parking lot cache. I looked at the gas gauge and decided we could wait until Montvale to fill up. That would be a good excuse to stop.

So, we pulled in to fill up and lo and behold, I did not have the waypoint loaded. Damn! I quickly got the PDA, but couldn’t remember the name of the cache. I finally found it, but the tank was full, the attendent paid and we were headed for the exit. I stopped at the garage. Gert wanted to know what was up. I had to input the coords! Just 300′ behind us. I zipped around, pulled into the spot, and declared where it was. Within seconds I was logging it. Gert said that wasn’t real caching. She was right.

Anyhow, I logged the find and we were off for Cumberland County!

Now I have logged both ends of the Parkway. 🙂