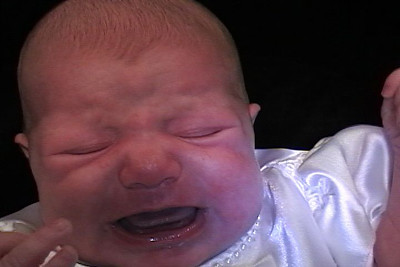 Beetle turned one month old today. To celebrate, we took a trip to Cape May. Gert and I had been discussing the Ugly Mug and we were both looking to get out of the house and do something fun. So off we took down Rt. 47. We eventually got there, found a parking spot, fed the meter, and began strolling the mall. Ah, this Middle America stuff feels pretty good. We waited for a seat out on the mall along with all the other families. Having the cutest baby in the world opens one up to passerbys. People kept coming up to us to ask about Beetle. “How old is she?” “She is so cute!” “Look at the baby!” Beetle is a star and everyone loves her. Move over Raymond.

The liquor store attached to the Mug has been converted into a dining area. The Mug is no longer the bar it once was. It is a little more upscale. There is still a little section where one can get packaged goods, but that is ancillary to the food production. The wall between the store and the bar has been knocked down to a chair wall. The whole place is bright. No, our Ugly Mug is long gone.

We eventually were seated. It felt good to be out in public. Summer school for me only had one more day and it was a celbration for me too. We feasted on mozzarella sticks, steamed clams (which always reminds me of Nana), cheesesteaks and fish sandwiches. I even had a beer! As soon as the bill was paid and we rose to leave, a fierce seagull swooped down and gobbled up a french fry that was left on the plate. Ah, I love the shore!

We strolled the mall. We definitely have the “in” stroller. There were four others just like that we saw. 🙂 We then headed up to the boardwalk. We rolled down Ocean Ave., passed the Queen Victoria. We told Beetle all about our honeymoon (well, maybe not all) and our lovely stay there. It was up to the boards. Gert was tired by then. Her stitches still bother her. I made a quick dash into Morrow’s for some Swedish fish. They remind me of Dad. I enjoyed them. The beach is so peaceful in the evening. After a bit, it was time to get home. This Middle America family tires early and it was about 10 o’clock when we crashed after an eventful evening.

Friday turned out to be just as busy. Summer school ended (hooray) and I scurried home. After doing some things around home, we prepared for Beetle’s photo shoot. As part of the package we purchased at the hospital, we had a “free” sitting at Sears along with a “free” 8×10. Everything with the hospital photographs has gone wrong. It’s a month now and we still do not have them. We met another couple who never got their pictures (families with babies seem to meet each other. It is an interesting phenomenon that I have picked up on). Phone calls have been made and promises made, but we still do not have our photos. Anyhow, we have more hope with Sears. We arrived early, but it was obvious there was no one else around. Gert changed Beetle’s outfit. Then the fun began.

Beetle seems to have the behaviors of a professional model down. Until she was completely satisfied, she would not cooperate. While Gert would prefer she not, I kept extolling the virtue of being a professional model. I explained to Beetle that if she worked really hard at it, she would be able to provide for her two overworked parents so we didn’t need to work anymore. And if she did really well, she herself, could retire at age 23. We shall see.

The photographer was very patient. It is difficult to get Beetle to smile, let alone in the direction of the camera. There were a couple different poses with a couple different backgrounds. I think a third was wanted, but by that time Beetle was done. With the digital photography, we were able to see the shots immediately and we knew there were a couple shots that were acceptable.

While there I finally understood something that had always intrigued me. Families with small children always seem to have an incredible amount of stuff with them. Diaper bags, toys, strollers, etc. We are no different. When we were through, off came the christening dress, on went her regular clothes, then Where’s the binky?, Is her hat there?, I can’t find the camera, etc. Sigh . . . I do not like having all that stuff with us.

The promotion worked, and we knew it would. We purchased some other photographs and even signed up for the Smile Savers plan. We will not need to pay the sitting fees for the next two years. Even if we only do a Christmas and birthday photo each year, we will be ahead of the game. Something tells me that we will have more photos taken than just those, however. After the photo shoot, it was off to Grammy and Poppy’s for a visit. Beetle always enjoys visiting with her grandparents!

Summer vacation is finally here. Kind of . . . Teaching is finally done and I am taking a few days off before I go in and begin the arduous task of updating 300 systems for 1 September. Pheeeewwww . . . Saturday morning arrived and I was eager to get going. Yes, I was going to actually go out and do a little geocaching today. There has not been much time in the last couple months for this. For the uninitiated, caching is using a set of coordinates to find something. Most times, a GPSr is used to locate an ammo box in the woods. But since Beetle and Gert would be accompanying me, we decided to do a few that were in parks instead. On a regular caching day, I would be up b4 dawn and ready. When caching with a baby, feeding has to occur, clothes need to be changed, bags packed, etc. By the time all that happend, the diaper needs to be changed and lo and behold, Beetle needs to be fed again. Patience . . . We evantually got going around 11:00. Caching with family is different. We took the scenic ride through Salem County out to the Delaware River. By the time we arrived at the first stop, a short stroll through a historical society’s grounds to the river, Beetle needed to be fed. We had made a couple stops on our way out. Gert waited in the car and I darted out to find the cache. Once everyone was ready, we went to a park where another cache was hidden. The bandstand was jumping with a band and a huge cookout for some group. We found the cache and rolled up to the river where there was a bench. Fathers long to play catch with their sons. Mothers cannot await their daughter’s recitals. I longed to share my pastime with Beetle We had found the cache at the children’s area of the park (not a good place to hide one, fwiw) and I was so excited that my little girl was with me. Her response? She slept through the entire episode. Sigh . . .

One might wonder how I was able to hook my reluctant wife to go caching with me. Well, the promise of a Cracker Barrel meal is always a good hook. We were really close to the only Cracker Barrel near us, so we went. Again, Beetle was the hit of the party. The family seated near us were very much enamored with our little pumpkin. Even though the food took forever, we had a fine time in the olde tyme restaurant. After our chicken sandwiches, we made short order of two more caches before driving home.

Our priest is being transferred. We are saddened by that. Saturday’s mass was to be his last, so we wanted to go to that one. We also wanted to get a card and a small gift for all he has done for us. So, on our way home from caching, we made a quick stop. Gert ran in while I waited with the sleeping Beetle. When Gert came back to the truck, she mentioned that thought it smelled musty. I didn’t smell anything. We continued on toward home. Gert made another comment. I agreed. I suggested that perhaps Beetle spit up. Gert leaned back and said, “Oh, no!” She brought Beetle’s rattle (a stuffed bear with a Beetle bib) to the front seat. It was covered in poop. We both knew that if the bear was covered, so was Beetle.

A minute or two later we were home. Yes indeed, there was poop everywhere. We hurried Beetle inside. Gert put her on the changing pad, undid her dress, opened her diaper, and . . . I nearly threw up! The amount, the consistency, the color of what was unleashed was horrific. Our little girl had an adult sized bowel movement! Oh my!

I know that Gert is my soul mate. She was stout throughout the entire ordeal. Me? I squealed. Gert is so good with Beetle and in no time all was calm. We went to mass and unlike the first time Beetle attended church, she was fussy. The Saturday mass is right smack in the middle of her fussy time, so it was not real surprising. There was a reception for Fr. Carmel afterwards. He blessed Beetle. She took no notice. 🙁

Having a baby is grand. Beetle definitely rules the coop. So much so that ‘Nado has changed her ways. The cat does not receive the attention she once did. She sees me holding Beetle all the time, stroking her head, rocking her, etc. ‘Nado now permits me to hold her. Yes, she is becoming a lap cat. I have longed for this since she was a little black terror. ‘Nado is inquisitive. She keeps coming up to Beetle. She sniffs and I think would nestled up to her, but whenever she gets close, Beetle flails her arms, screams, makes a sudden movement, etc. Not so much because of the cat, but because that is what she does. ‘Nado runs away each time. 🙂 Ah, the love of two sisters.