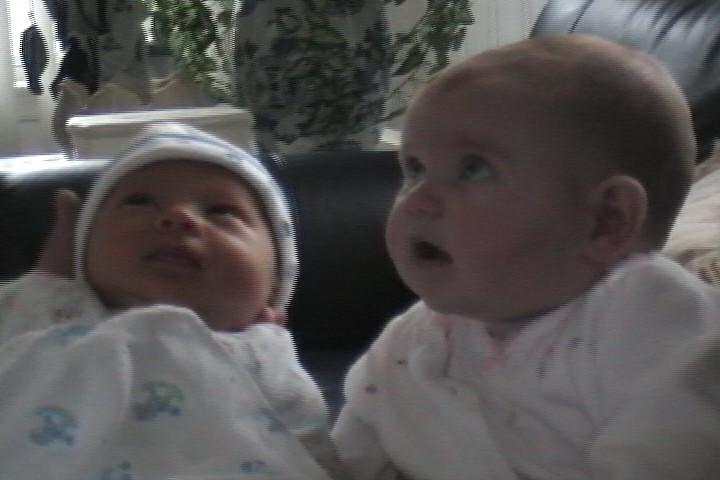 Lazy Saturdays. But not really.

I found a new game to play: geogolf. Eighteen random waypoints (golfpoints) are generated within a pre-determined radius. The object is to get as close to those golfpoints as possible. The closer you get, the lower your golf score. With them being random, it is easy to have to work at getting to them. This game got me out and moving ealry Saturday.

Upon my return, we prepared for our trip east to Egg Harbor to visit Beetle‘s cousin Sean, Aunt Tracy, and Uncle Bob. Saturday was rainy so our ride over was uneventful.

Sean was asleep when we arrived. Uncle Bob was excited to see Beetle. Beetle’s godfather is a good host and Beetle had a grand time playing. Sean did wake up and he is such a cutie. Beetle looked huge next to her three-week old cousin. It was not too long ago she was that small. Aunt Tracy looks good and they will all be back home early in the week.

After our visit, the Owens clan went to Babies R Us. We poked around a little bit. Beetle wants an exersaucer for Christmas. Daddy has a difficult time seeing the differences in the models, although the price tags would lead one to believe there are huge differences. We picked up a couple little things and then saw the LeapPad on sale. This was the best price we had seen so we decided to pick it up. At the register, however, we found out that these employees do not understand sales. Beetle is a girl. We selected the pink LeapPad. According to Babies R Us, only the blue LeapPads were on sale. Pink ones were full price. Rather than make a scene, we refused to purchase it. Sigh . . . Everyone since has pointed out that the local Toys R Us (yes, same company) have them on sale.

Slightly disappointed, we had one more stop before we headed home. Another game similar to GeoGolf is Geodashing. Each month random dashpoints are generated all over the world. The idea is to capture as many as you can. There was one nearby so we sought it. It’s always fun to go off-road with my wife and daughter at night on the end of a corn field. 🙂 We got close enough to earn our points!

Thus ended another fine day with the family.

Take a right at the light, keep goin’ straight until night, and then, boy, you’re on your own

— Bruce Springsteen, Blinded By The Light