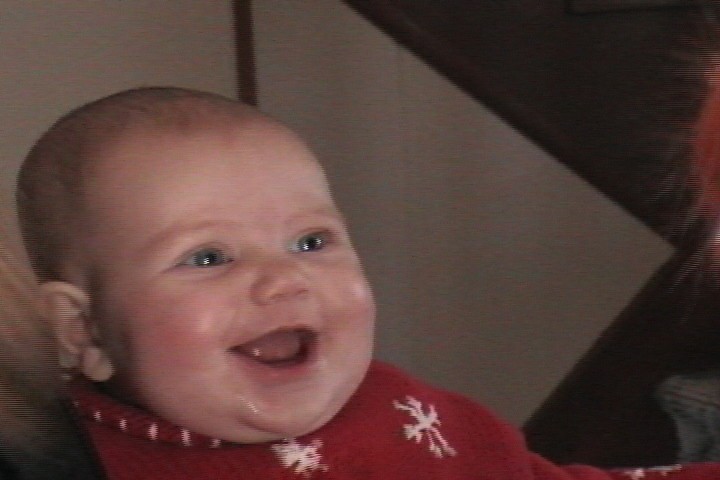 We love lazy Saturdays, but we did not have one today. Instead, we had a busy day planned. All week we looked forward to our planned day. Yet, stirring from bed took a little bit longer than we had planned and we started off a bit behind schedule.

Beetle slept through the night. Thankfully. Mommy and Daddy slept in. Then the festivities began. We had breakfast and completed the two Advent calendars we have. Aunt Patty gave us a nice one which is revelaing either a song or a poem. Then we have our hanging one which we just move the marker for the day.

Then we were off.

The first stop was to Wal-Mart. This store is not my favorite, particularly after this week’s episode. But today was not too bad, even with all the cars in the lot. I needed more video tape for the camcorder and Gert wanted to pick up some stickers.

Our next stop was to someone’s house we do not know. Nor did we know where they lived. I despise visits like this. But we found it and had fun shopping. Apparently, the aunt of one pf Gert’s students is a Books Are Fun sales person. She is moving and was unloading a garage’s worth of inventory cheap. Indeed there were many books. I passed on the one book I liked, but we purchased two for Beetle. Gert wanted A Stranger in the Woods, a highly recommended book and I selected a fun sea story with a toy in the middle of it.

From there, we crossed Vineland to Durand School, where Mommy and Daddy first met. The first Saturday each December is the annual craft fair. We usually go, but did not last year because of the snow storm. In contrast, today was clear and relatively warm. The fair seemed less crowded today than it normally is. Perhaps the time we were there was a lull. We ran into Gert’s former mentor. She, her daughter (older than me), and grandchildren all fawned over Beetle. It turns out they are friends of a member of my poker group. We saw a couple of staff members of the school and learned that the mother of a teacher friend of ours had passed recently. We saw the best craft I have ever seen: a hillbilly flashlight. This is a paint stick with a match stuck to the end, fastened to the paint stick with a mouse trap. Really cute, but alas, I passed. Gert picked up a couple snowmen things (some for us, some for her secret pal).

After the craft fair, we drove to our friend Tara’s house. Tara just had a baby five weeks ago. Rachel is very cute. Rebecca, Tara and Joe’s five year old daughter, has grown quite a bit since the last I saw her. She had just returned from ballet class. Rebecca was a hit with Beetle. I think children know how to play with each other better than adults. She moved her toy around and had Beetle hooting and hollering. It was quite a site. We had a nice visit.

We stopped off at Grammy and Poppy’s just for a moment. We had planned to visit Sean, Tracy, and Bob, but we didn’t think they were home. We drove home and had lunch. Soon after, Brittney and Bill visited. They had gone to Disney World recently and had bought Beetle a gift. Brittney has grown up so much. She too is five and is in Kindergarten. She says she likes it. 🙂

Gert pointed out recently that Beetle now has tears to accompany her crying. I saw those tears this afternoon for the first time. It is very sad to see your daughter really cry. 🙁 A combination of being hungry and the pounding of the hammer disturbed the princess. Mommy hung several photographs today. While it looks beautiful, the noise bothered Beetle.

‘Nado is so good with Beetle. Gert was holding Beetle when the cat came over. Beetle petted her feline. ‘Nado is tolerant of her. I think they will be best friends.

We went to visit Sean. Sean was asleep, but we hung out in his nursery with Tracy and Bob and later, a neighbor of theirs. It is nice that Beetle has a cousin who she will be able to play with as they grow. Sean’s nursery is adorable. He has a Winnie the Pooh theme and his parents have done a beautiful job decorating.

Beetle finally mastered a skill she has been practicing for a while. She can now take her pacifier out of her mouth and then put it back in. For a couple weeks now, Beetle was proficient in taking the binky out, but could not get it back in. Tonight in Sean’s nursery, she showed us she can put it back in her mouth. Every once in a while the binky turns on her and she misses, but for the most part she is successful.

Beetle became tired after a while. She has been on the go all day with only a little sleep in-between in the car. She is pooped. Gert gave her a bath, in the sink, as tonight is not the night to start something new.

3 thoughts on “Friends and Family”

What if society encouraged us to reject what has been accurately described as doing things we detest, to buy things we don’t need, with money we don’t have, to impress people we don’t like.