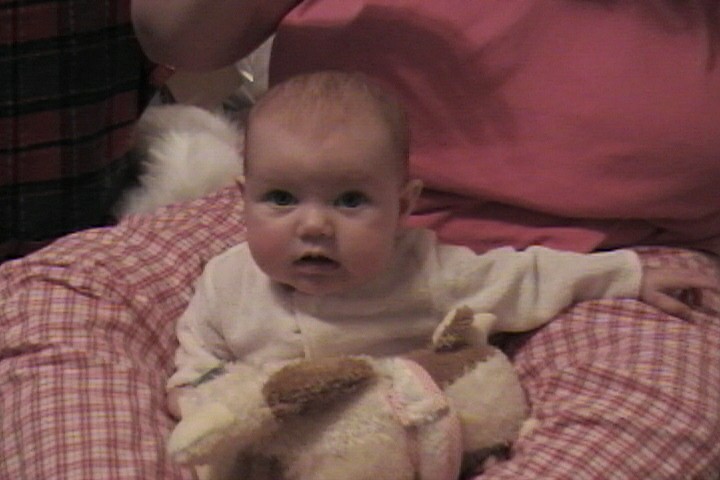 A few weeks ago Santa gave Beetle a sign to place in the window of our house. It says Santa Stop Here. Beetle hung it up in our front window so it could easily be seen not only from the street, but the sky as there are few obstructions in the front of the house. Santa used his magic key to open the front door since we do not have a chimney.

On Christmas Eve, Beetle visited her grandparents and many of her aunts and uncles. She had a blast and received many presents. She was kept up late for the annual family photograph. She did well until it was time for her to go to sleep. Ah, our little girl was cranky. 🙁

But this morning she was up on schedule. Beetle didn’t really notice that it was Christmas. Most of her gifts had been under the tree. Few were wrapped.

She did seem fascinated with some of her gifts. She liked her videos. Santa brought Beetle an Elmo doll that sings E-L-M-O to the tune of the Village People’s YMCA. While Daddy finds this horrific, Beetle was curious. Mommy thinks it is the best gift ever. Such is life in the Owens household.

Beetle liked playing with the wrapping paper and bags. She grabs each and everything. I have no doubt that next year she will be able to peel off the paper by herself.

After opening gifts and having breakfast, we all attended church. It was a nice service, but sparsely attended. Our priest told the same old jokes during the homily.

Once church ended, we went to Grammy and Poppy’s for a Christmas feast (ham). We had a grand time playing, eating, and perhaps even napping!

In the early evening we returned home, fed Beetle, and put her to sleep. Her parents retired, pooped from all the festivities.