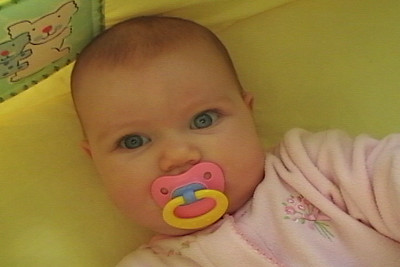 We’re all pooped! It’s been a long week and we are all exhausted. Beetle so much that she is falling off the couch. 🙂 That was Monday afternoon. Beetle did not not sleep much at day care. By the time she arrived home, she just pooped out. It was cute with her hanging off the couch. She reminds me of . . . me!

Beetle has a new toy: an exerball! It actually isn’t new. Mommy bought this to help induce labor. While we had it in the hospital room, it wasn’t used. Frankly, Daddy never understood it’s intended purpose. Nevertheless, we resurrected this thing this week for Beetle to roll around on. She liked it a lot.

Much to my dismay, Beetle has not been sleeping on her stomach this week. We don’t know why the change, but we brought the camera in a couple mornings to try to get a photograph of her pushing herself up. No dice. Beetle has been on her back all week. Early in the week she slept until we woke her. The last couple days, Beetle has awoken early and has played until we went in. She is so mature with both waking up and going to sleep. For the last couple weeks, Mommy has put Beetle in her crib at night awake. Beetle has been very good with putting herself to sleep. She sometimes plays for a few minutes, but she always gets herself asleep. We usually sneak a peek later on. Beetle sleeps very peacefully.

Beetle is so full of life. She is ever-happy. We have noticed recently that Abby is less willing to pose for photographs. While we take photographs of her, she is busy doing things. When she looks at the camera, we don’t get the big smiles as much. The action shots where Beetle lets loose are often blurry because she flails about so much.

This coincides with being held. She doesn’t sit still much anymore. She likes to move. While she isn’t crawling yet, she wants to.

Beetle is a child of routine. After being awoken, Mommy feeds her a bottle. When Daddy comes down after getting ready, he takes Beetle as Mommy finishes getting ready. Beetle likes her Elmo. She cannot squeeze his hand to make him dance and sing, but knows that that is what is needed. She leans over to him when she wants him to play and touches his hand. This begins the constant playing of E-L-M-O played to the tune of the Village People’s YMCA. Daddy cheers for Mommy to reappear to end the concert.

One thought on “We’re Tired”

FWIW Bob, you couldn’t have been more right about all of the things you said to me ten years ago when I was a newbie cacher. I remember you telling me that sometimes you would spend months working on an idea or cache. I thought that was absurd at the time, now that is allI do. You would be impressed with some of the stuff I have put out and the locations I have found. Thanks for all of the advice and mentoring. We could use someone like you around to fight the good fight. Cheers.