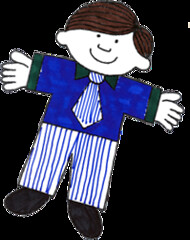 This locationless geocache is now archived.

Flat Stanley is a children’s story written by Jeff Brown. Little Stanley was flattened when a bulletin board fell on him. Many adventures soon ensued. His parents sent him to visit his grandparents, but instead of sending him on the train, they folded him, placed him in an envelope, and mailed him to California. What fun!

For years elementary school teachers have used Flat Stanley as a springboard for writing letters. When the schools entered the Digital Age, Flat Stanley took off in cyberspace. In the 1994-95 school year, I had a class of fourth graders (nine-year olds) video conferencing (over a telephone line no less) to the South Pole, Australia, and Florida from our classroom in New Jersey. They caught up on the travels of their Stanleys who were visiting those places.

For years teachers have used this book to teach the mechanics of writing a friendly letter. As the Internet became more ubiquitous, teachers began e-mailing Stanley around the globe. The idea is that the receiver of the student’s Flat Stanley would print him out and take him on an adventure. Then the receiver would e-mail back the student and explain what Stanley had been doing. Photographs and memorabilia are often exchanged. Students learn about interesting areas away from where they live. Our Stanleys made it to the South Pole, Australia, Alaska with real moose, the Indy 500, the Nile, etc. Others have been at the White House and the Today show. Flat Stanley is famous.

Well, Stanley is back and ready for you take him to a yard.