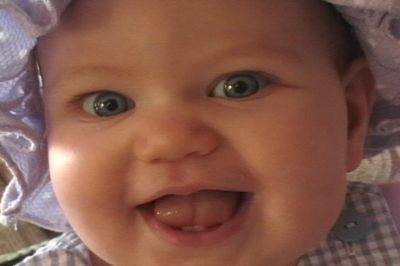 Beetle is such a good citizen! She woke up in as good of a mood as her father. Today is voting day and Beetle was ready to go. She donned her pretty purple searsucker outfit and we headed to Grammy’s in anticipation of 80°.

When Daddy pulled into the driveway after work, Mommy and Beetle were just deboarding their vehicle. Daddy invited them into the gas-guzzler for the jaunt to the nearby school. We arrived and looked for the waving American flag. The voting volunteer indicated that voting was light. Normally, we hover at around 10% participation for school elections. Last year it was 7.5%. Beetle is now two-for-two in voting opportunities. She was a hit with the old folks running the polling place.

We hope Beetle catches the excitement of voting that Daddy has each election. This year we have four elections (school, municipal, gubernatorial primary, and general). Daddy explained the question (school budget) and the candidates for the school board. Beetle helped pull the levers. Daddy was so proud. 🙂

Beetle had dinner (chicken and apples) and played. After her bath, Beetle played with her Elmo Teach-and-Learn table that Aunt Kim and Uncle Mike had given her. She stood as she played with this. She really liked the Cookie Monster who she kept opening his mouth. Beetle knows that Cookie Monster likes cookies despite what the politically correct folks think.

All that standing tired the poor girl out. There was no story tonight as Beetle wanted her bottle. She was asleep before Mommy got her to the crib. Nighty night, little girl.

But answer me this: how can a story end happily if there is no love?