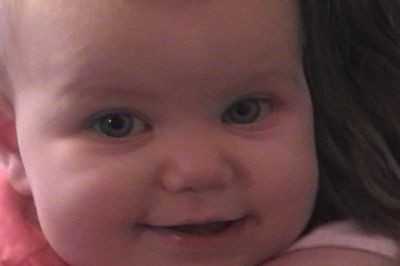 Despite the smile, Beetle has been under the weather. On Sunday evening, she had a slight temperature. Somewhere around 100°. She went to bed. All seemed okay.

When she awoke Monday, she had no fever and was in good spirits. Yeah! So, off we went to day care. We informed Miss Donna of the fever from the night before, but we really thought it was Beetle teething and with no noticeable signs, we were confident of her health.

Mommy called me in a panic around noon. Day care had called that Beetle’s temperature was 103.9° and see needed to go home. Mommy tried to get a doctor’s appointment and I left work to pick our sick girl up. I had to stop by Mommy’s work to pick up the car seat (that will end soon as we have purchased two full-size car seats now that she is older).

When I arrived, Beetle was asleep. I had to wake her. 🙁 She seemed all right. We went home. Beetle did seem a little warm. I administered Tylenol to her. She gulped it down and seemed in moderate spirits.

Beetle had only slept about 45 minutes thus far on Monday. Since she was ill, I thought she needed some more. She didn’t immediately want to fall asleep, but she eventually went out. She woke up a little before Mommy came home from work.

Beetle seemed fine the rest of the day. We gave her some more medicine later and that seemed to reduce her fever. Mommy decided to stay home with her on Tuesday, just in case. That was a good decision that was made early.

We are very fortunate parents. Beetle is a wonderful child and has not had episodes like we here from so many other parents. But last night was ill and she did not sleep much. And neither did Mommy. All night long, Mommy was constantly getting up to soothe our sick screaming little girl. Beetle needed her mother and Mommy rose to the occassion.

<aside>Just so you don’t think I was uncaring, I was up, but Mommy was the trouper and deserves all the accolades.</aside>

By the time the girls really made it to sleep, I was awaking for work. I left without seeing my girls. I didn’t like that, but thought they needed their sleep. Apparently, it wasn’t too much longer. 🙁

Beetle was okay today, but her fever would come back. We finally got a doctor’s appointment after work today. The doctor confirmed that Beetle is ill. He prescribed Amoxicillin (spelling) and told us to continue with Tylenol. Beetle has the begiinings of two ear infections. She has running nose. She tries to be happy, but obviously, she is battling this.

She had some trouble falling asleep tonight and is breathing heavily now. We hope she will sleep through the night, but are prepared for otherwise.

Our little girl has finally become sick. She made it through the cold winter with only the sniffles. The up and down weather of spring is doing her in. Bit she is still the cutest baby ever.

While we were in the sick patient waiting room, we met Alley, a girl who was also born on 29 June. She was sick too, but was restrained in her car seat. Beetle was happy to see other children and interacted with them!

The single biggest problem in communication is the illusion that it has taken place.