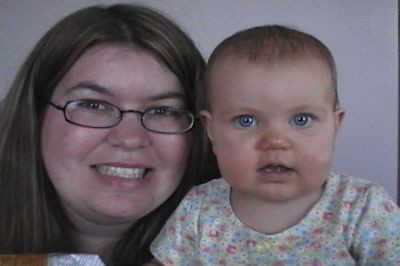 Beetle has had a busy week. She had ear infections which slowed her down until the weekend. By Friday, Beetle was smiling ear to ear from morning to dusk.

Aunt Kitty, Aunt Kim, Uncle Michael, and Uncle Frank were all in town for Sean’s baptism. On Friday evening, we went out to the Malaga Diner. This was the first time we ever ordered Beetle food from the menu especially for her: a bowl of applesauce. Beetle gave that a thumbs up!

On Saturday, it was more dining out as the clan headed once again to Friendley’s. Uncle Bob and Sean joined us for this meal which had horrible service. Beetle mooched some whipped cream from Uncle Frank.

Sunday was busy. We were up and out early. We ran a couple errands before heading to St. Isadore’s for Sean’s baptism. We arrived early. Soon after, someone Daddy works with showed up. Her husband was to be confirmed today. Uh oh! That would surely lengthen the service. Soon, we all headed in. The service was long, but not because of the confirmations. It was warm and Beetle’s parents were uncomfortable. In complete silence, Beetle was passed back from Aunt Kitty (a row in front) to Mommy. In doing so, Beetle called out Mom-ma. As expected, Mommy was quite pleased, even if it was loud.

The baptism didn’t occur until after the regular service. It was a pleasant service and Sean was cooperative. From there we all headed to the Paper Waiter restaurant. This is at Wheaton Village where guests stayed for Mommy and Daddy’s wedding. We had a private room and a nice food spread. Lots of photographs were taken and all the relatives took turns passing around the four babies: Baby of Honor, Sean, Beetle, Madison (Aunt Tracy’s sister’s daughter), and Josh (Aunt Tracy’s cousin’s baby). It was baby central there. All had a good time and we left well-fed.

From there, Beetle and her parents drove to Mauricetown for Allison’s birthday party. As always, there were lots of folks and the bouncy castle in the driveway appeared to be a hit with the children. Beetle was a perfect little lady. We watched the present opening and the cake cutting, but after that, we were wiped out, so headed home.

Beetle has been in great spirits. She is eating more and more real food as we feed her off our plates. She is still not graceful with a sippy cup. Beetle has, however, begun crawling. Up til now she has crawled, but it has been mostly her arms which drag the rest of her along. That never slowed her down or anything, but when the baby at day care who is a couple months younger began crawling, Beetle’s movement looked odd. Anyhow, Beetle employs her legs now and hoists her butt in the air. There is still room for improvement, but she is getting this down pretty well.

Mommy likes peering in on Beetle at night. Our little girl is a cutie. Now that she is crawling she must be having dreams of the places she can get to as she sleeps with her butt in the air. 🙂

On Tuesday we returned to the doctor’s for the billable follow-up. Beetle is about 21 pounds and is 28 inches long. She still has a slight infection in one of her ears. 🙁 More meds.

When we arrived home, the power was off in the neighborhood. Sigh . . . soon a Conectiv worker came to look at the transformer, which is on our property. The previous owner had built a hedge around the transformer. This electricity worker had no problem cutting it to get to the transformer, even though I had pointed out the path to it from the side. Grrr . . . He then announced we would be without power for several hours as the transformer would be replaced.

Beetle, your parents are no Abe Lincolns. We are products of our modern society, so after you went to bed, we didn’t have much to do. About 9:00 in the evening, three trucks brought a crew of workers and a new transformer. About 10:30 we had electricity restored! The workers did not leave until 2:00 in the morning, according to Mommy (Daddy was asleep). It was truly something to watch a crane hoist these heavy pieces over our yard, just feet from where we were watching through the window.

One thought on “Getting Back to Normal”

There’s a lot of beauty in ordinary things.