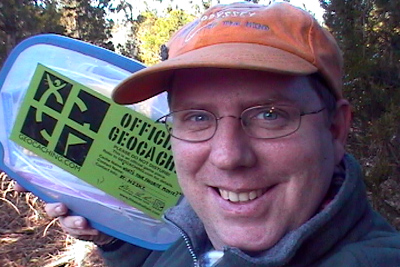 Pretty much. When I began caching, I hadn’t fleshed out everything and I thought photographic proof might come in handy. To that end, Gert and I took the digital camcorder with us on our very first hunt. I brought that camcorder with me on virtually every hunt for the next two years. I cached alone most of the time, so getting a photograph of me was more difficult. After a while I perfected it. It became known as the Fro shot.

I had never really thought much about it. For each cache I found, I usually posted two photographs. One was captioned cache and the other Fro. After a while, Floopy commented about my smiling face on all my logs. From that point on, I figured I was known as the guy in the orange cap with a smile. When I attended my first event I distinctly recall folks knowing who I was, even though I knew (almost) no one.

To this day, in my caching database, I include two photographs to accompany each log: one of the cache and one of me at the cache.

This was the first mention of the orange cap, I believe.

You never open your mouth until you know what the shot is.