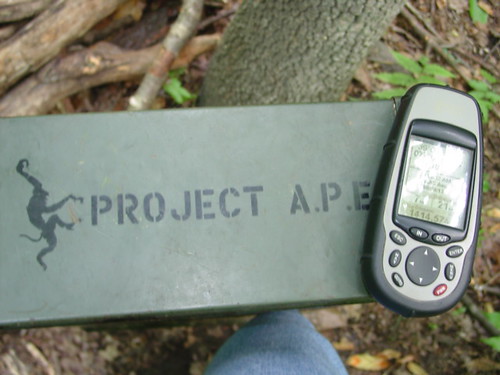 This cache has been on my radar from almost day one. But as time progressed, it became less of a pilgrimage. Frankly, I had forgotten about it.

Then came a visit to some relatives. Like any trip, it is always a search to see if there is anything of interest in the area. Mike and Kim had been asking us to visit for a long time, we just never did so. We finally made arrangements and I saw they live just a couple miles from here. D’oh! Had I known that, we would have been here in 2001. 🙂

All weekend time came and went, but little time was spent caching. We were to leave today and I wanted to at least get this out of the way. I took off early in the morning.

I was a little twisted around driving here. But once I got to the park, all was straightforward . . . initially. I parked, put on my hiking boots, and headed out. I just followed the GPSr instead of planning ahead. That was a mistake.

I ended up on the wrong side of the creek. If the park wasn’t so manicured, I probably would have forged the creek, but decided to walk back out and approach properly.

Back out I went, crossed the bridge, and shinnied down the hill. It probably would have been easier to follow the path down and around.

Anyhow, I got to the area soon enough and then could not find this oversized ammo can. Hmmm . . . coordinates were very soft. I have seen others state 80 feet. I do not recall exactly, but the coordinates put me down a bit and next to the water.

But a big pile of sticks isn’t going to go unfound for too long and when I broke free of the water, I found it. Other than the box, there is certainly nothing left of the original cache.

I actually signed this logbook, something I do not do these days.

I am happy to have found the cache, but truth be told, there’s nothing special about this cache that any other cache in this park would bring people from afar to. Some folks logged this recently on their way to GW III.

At the time, my life just seemed too complete, and maybe we have to break everything to make something better out of ourselves.