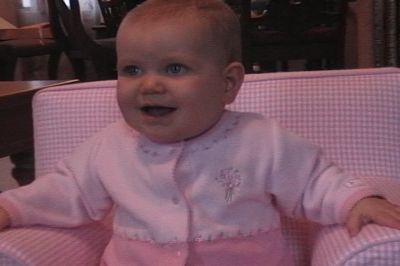 Our little girl is growing up. For her first birthday, Aunt Jill and Uncle Frank gave Beetle her own chair. Beetle loves it! It is embroidered with BEETLE.

Despite all the current talk about television watching and babies, we do show Beetle Baby Einstein DVDs. She likes them. She was so intent on watching, she would not even look at the camera!

Beetle has found her wiggle (nose to everyone else). She has discovered that her fingers can get inside. 🙁 Yuck! I don’t think she finds anything in there, but she enjoys putting her fingers there nonetheless.

Beetle has taken to crawling about the house. She can scoot quickly and it is not unheard of for her to visit a parent in a different room.

Mommy brushes Beetle’s teeth now. She has eight of them and her molars are coming through.

You got to let the sadness rise on up.