And what a fine day it was. Of course, today is not only our little girl’s birthday, but it is Mommy and Daddy’s anniversary. We awoke early and got the day started. We wished Beetle a happy birthday and then Mommy went to a workshop. 🙁 Mommy was gone until about 3:15. In the meantime, Beetle and Daddy had a fun-filled day.

First, we played. Beetle has a wide assortment of toys. She spread many of them about the living room. We stacked the rings. We played the Elmo table. Beetle banged on the bird bath toy she received over the weekend. After a while she decided it was time to explore. In the last week or two, Beetle has taken to the road. Before then, she crawled about the room. Now, she crawls about the house. In a blink of the eye, Beetle can be in another room. This is adding to the physical work of her parents. We rush out, pick Beetle up, and place her back down with her toys. Usually, it is not long before Beetle is out and about again. The joys of a growing child!

Even more recently, Beetle has taken to opening cabinets. This is what she was interested in this morning. She is quite capable of opening the kitchen cabinets. The only problem is that she was in front of it. She didn’t quite work out scooting to the side to open it. Mommy and Daddy have planned a visit to Home Depot for some childproof latches.

Beetle is also such the pip with the television. Mommy is fond of having photographs everwhere. Beetle likes to take them and bend the “leg” the photograph is propped up with. This is going to reduce the number of photographs which are displayed. Beetle is adept at removing all the DVDs and VCR tapes from the cabinet. She seems to have such joy in making this mess. Beetle then moved to her diaper bag. She enjoyed playing Mommy as she removed all the goodies from the bag. Poor Daddy had even more to clean up now.

After breakfast and a poopy diaper change, it was time for a nap. Unfortunately, only Beetle took one. Daddy cleaned. With this being a birthday, Grammy and Poppy were coming over for dinner and to pick up the tarp, tables, and coolers from the weekend party. By the time the princess awoke a few hours later, the house was pretty well cleaned, save a couple little piles and vacuuming. It was time to play some more. Beetle really enjoyed being held up high and then being “tossed” into the big couch pillows. She hooted. She cackled. She loved it! Whenever I stopped, she begged for more. When Daddy eventually became tired, she took to the diaper bag again. 🙁 So, we played Couch Toss some more before Mommy came home.

Grammy and Poppy came over and we had Beetle’s favorite (currently) meal: hot dogs! We had some of the finest white corn to accompany these, salad, and baked beans. Yummy! Beetle eats an entire hot dog now. After dinner, Beetle opened her presents from Grammy Owens. She liked her Clifford book, but I think the See N Say will be the favorite. Mommy and Daddy gave Beetle a three-piece jigsaw puzzle. Then it was time for Happy Birthday. Beetle enjoyed her cupcake!

Beetle had a big day, but after dinner, she was ready for bed. Unfortunately, she enjoyed her cupcake so much, she needed a bath. So, after her bath, she skipped her bedtime story and went to bed. Pleasant dreams. You are now one. 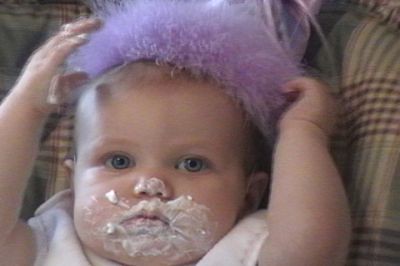