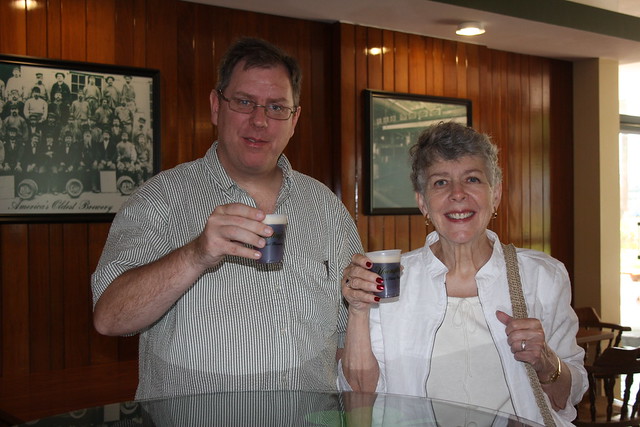 Interestingly, not much these days. When I do, it is usually Yuengling, the oldest continuously operating brewery in the United States. I believe I first drank Yuengling back in college, more than 20 years ago. It was one of the Pennsylvania beers I learned to enjoy (Rolling Rock, Mickey’s Big Mouth, Stroh’s, etc.). I liked it, but did not continue with it after I was graduated. Many years later, I met my wife. Her parents do a lot of camping with a bunch of other couples. They all know each other through Boy Scouts. They formed the Yuengling Canoe Team (YCT) and even had Yuengling sponsor them. I think that just means the company bought the beer. My in-laws do know how to camp!

My favorite mass-produced beer, however, is Pilsner Urquell. This Czech beer often is considered the finest beer bottled. Its taste is wonderful, but being a pilsner means it is not as heavy as a lager, which is appealing to me.

I have found Pilsner Urquell on draught in only three places in my life:

There are other beers I enjoy: Flying Fish, Blue Collar (which apparently is now defunct), St. Pauli Girl. Now that I am middle-aged, a husband, and a father, my beer drinking is relegated to events (weddings, funerals, etc.).

2 thoughts on “What Beer Do You Drink?”

I ain’t tongue-tied, just don’t got nothin’ to say