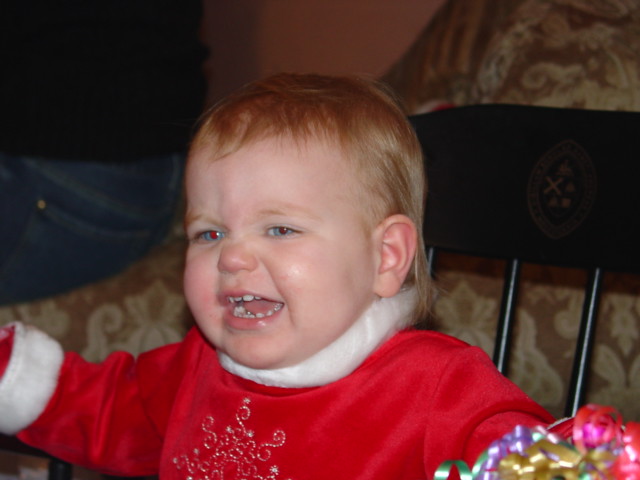 Happy Christmas Eve! We had a busy day preparing for our party and also for Santa.

Mommy and Beetle took off for the mall early and were home early. They beat the crowds. Daddy went out after they came home and was not as fortunate. To top it off, he failed to purchase a head cleaner for the camcorder, so it is unlikely video will be had until Monday.

Mommy worked hard preparing the house for the party. Unfortunately, Aunt Kim and Uncle Mike did not come up from Maryland. With many in Kim’s family ill, they did not want to risk becoming ill before heading to Jamaica on Monday. Beetle missed them.

Aunt Kitty arrived first. She gave Beetle a book, Jingle Kitty. It looks like a fun read with lots of photographs of kittens. Soon everyone else arrived.

There was a lot of food: little sandwiches, shrimp, deviled eggs, chips & dip, and punch. It was all yummy. Later a Boston Cream cake and cookies appeared.

Beetle danced for her audience. She and Sean played. There were a few moments of jealousy, but that quickly passed. With so many aunts and uncles, Beetle does not lack for attention. Beetle was clad in her Santa suit. At some point, she acquired Sean’s Santa hat. Later, the two exchanged beverages. So much for hygeine.

We exchanged our Pollyanna gifts. It is obscene how many gifts the children received. The tally of what was given will have to wait until tomorrow, but suffice it to say, the big pink car is surely to be a hit.

Beetle enjoyed eating all the junk food tonight. She was up long past her bedtime. She hit the wall at 9:30 and we put her down. The party dissipated soon after. Beetle is definitely the life of the party.

And then one day you find to your intense delight
That three wrong turns can really make a right
So why not be like me, be proud of all your crimes
Cause when I screw up once, I do it two more times