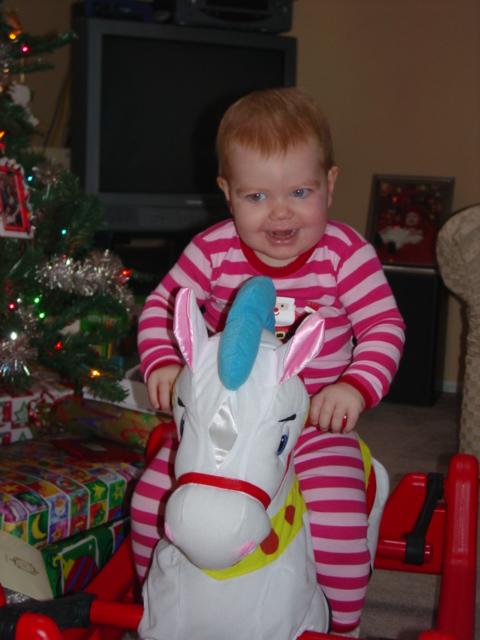 Santa came and delivered many gifts for Beetle. And she sure was excited. Unlike last year, Beetle was more involved in Christmas this year. Aunt Patty had sent Beetle an Advent calendar again this year. Each day Beetle opened a new window. In addition, Beetle moved the candy cane on the December wall calendar in the kitchen. Even though she was up late last night, Beetle was well rested for the gift opening. We got started about 8:00.

Beetle was intrigued by all the gifts under the tree. We moved gift opening to Daddy’s room this year. And because Beetle has six Christmas trees, this caused no issues whatsoever. Beetle had colored lights, silver garland, and all the tacky homemade ornaments.

There were many presents for Beetle. She was good at helping opening them. Sometimes Mommy helped, but Beetle got the hang of it. She received so many wonderful things. Grammy Owens sent a cute sweater and purple pants, a jumper with pink flowers, a sign language DVD, rubber duckies for the tub, tights, an angel snow globe, and shredded money. Beetle likes all these things. She enjoyed carrying the rubber duckies around. Such is life when you’re one.

Santa had left lots of stuff including a Wiggles guitar. Oh, how Beetle has enjoyed this. There are no strings, but buttons aplenty. Each plays a different Wiggles song or sound effect. Our little musician has another instrument to add to her band. Santa also prepared the little slugger for the baseball season. Beetle now has her own baseball tee. Oh, the joy Daddy had seeing his little girl with bat in hand.

Beetle has a rocking horse at school. It is just a little plastic thing, but she seems to like it. We purchased her a Radio Flyer rocking horse. This is similar to a classic horse, but it is much lower to the ground, which is far more suitable for her at this age. The traditional springs have been replaced with industrial strength rubber. Beetle has learned how to mount and dismount the horse. She enjoys rocking violently.

There were more clothes, more toys, more bath stuff. Beetle now has markers, but her parents have nothing to fear. These markers are special in that they only write on specialty paper. She has an alphabet book that she colors, but when she misses or decides to paint the rug, nothing happens! This is definitely kewl! Beetle also has a bunch of new books to read. The girl is hardly ever without a book in hand, so we feel she will enjoy these too. Finally, our neighbors gave Beetle two Care Bears that play music. We were most impressed with their thoughtfulness.

After the goodies were opened, we prepared for church. Not surprisingly, the main priest did not perform the service. For a celebratory mass, it was rather flat. All the pageantry of the past is now gone. Attendance was sparse. When it was over, we came home and Beetle took a nap.

Once she awoke, we headed to Grammy and Poppy’s house for the balance of the day. It was rather laid back this year. Aunt Amanda and Uncle Jesse were there when we arrived, but they left soon after. Aunt Kitty was there too. We had dinner and played. Beetle likes to play the organ when we visit and she was outstanding! After fun and games, it was time for the cherub to go to sleep. We came home and put an end to a most spectacular day.

Take a right at the light, keep goin’ straight until night, and then, boy, you’re on your own

— Bruce Springsteen, Blinded By The Light