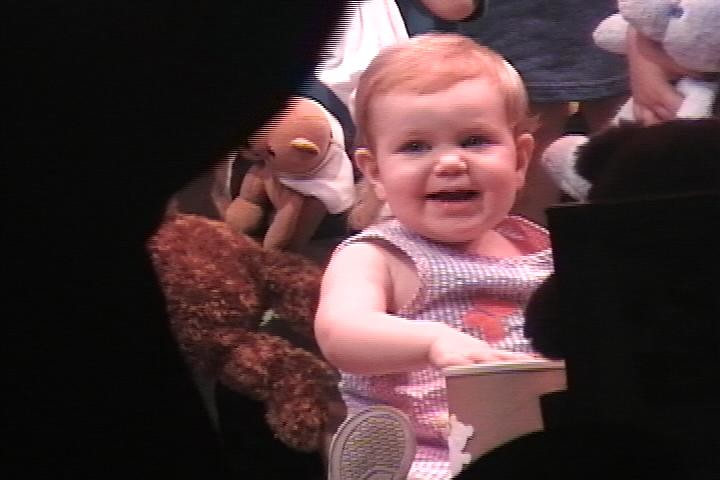 Daddy returned to work. It was decided to send Beetle to school for part of the day. This would allow Mommy to run a few errands but more important, Beetle had one last rehearsal for her performance tonight. Beetle was very tired this morning and was not particularly thrilled to be going out. We think she has a little bit of a bug as her poop has been a bit runny the last day or so.

Beetle had her music rehearsal and Mommy picked her uparound 10:30 or so. They headed to the mall and then had lunch together at Friendly’s. Daddy had no lunch. 🙁 Then it was home for the girls to rest the balance of the day.

Daddy came home hungry. Dinner consisted of a bowl of cereal he prepared himself. So much for the stay at home mother.

Beetle had just awaken and was in good spirits. She was quite playful, but a bit whiney. Determining she was a bit hungry, she was provided some dry Apple Jacks. She liked them. She kept bringing Daddy one at a time. She played with her blocks. She was raring to go!

And go we did. We took off for the Vineland High School for Beetle’s spring concert. We were asked to get there at 6:15 or so. There was a loooooonnnnggg line to enter as the theatre was not opened yet. It was quite a wait.

We finally entered and took Beetle to one of the classrooms that served as a staging area. Beetle’s teachers were nowhere at first and there seemed to be no sign-in sheet. We waited with our girl knowing full well that we were not going to have close seats this time either. 🙁 Eventualy Mommy left to find Grammy and Poppy. A little while later, Daddy felt secure enough to leave Little Miss Muffin with the crowd and he found the family in the back of the auditorium.

The troupe did not start on time. Sigh . . . but eventually Miss Gail took the stage and let us all know the new security system for the school would be installed soon and that enough money had been raised to put a telephone in each classroom. Such is life with private school. We had our prayer and the festivities commenced.

The kindergarten class was up first. Four of them plucked their way on violins. Then the rest of the class (11 in all) joined them for a few songs.

They were followed by the Pre-K 4 and then the Pre-K 3 classes. Pre-K 4 sand A LOT of songs.

Eventually it was time for all the toddlers. Daddy moved down front to get better video. He didn’t know where Beetle would be and ended up not in an ideal position. Beetle was visible between the music director and a stuffed bear that was on stage. There was not much that could be done to make this a better situation. 🙁 The theme of the show was going on a picnic and teddy bears. Beetle and her classmates played drums made of oatmeal canisters and other used containers. Beetle kept time pretty well. She seemed to enjoy herself onstage, but was not as demonstrative as she was during the Christmas show.

Some of the photographs shown here show Beetle singing along with the song. She is quite the talent!

At the end of the performance, the audience was invited up to take flash photography. Beetle was wonderful . . . until a little girl near her made a beeline to her parents. Seeing that, Beetle darted for me. One of the aides picked her up to keep her from going to the edge of the stage. Beetle was not happy to be denied her parent. 🙁 Daddy was sad too. The good news is that Beetle quickly recovered.

Afterwards, Beetle walked out with Grammy and Poppy. She loves her grandparents.

One thought on “Spring Concert”

But let’s not speak of what might have been. Let us speak instead of what is. You are whole.