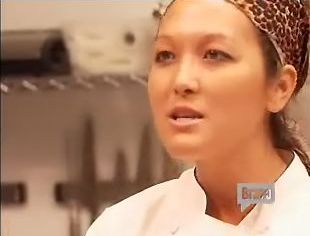 Television is amid a paradigm shift. ABC is releasing four shows through iTunes. YouTube has single-handedly brought a new audience to Saturday Night Live. Just when everyone thought the thirteen channels of shit would need to be updated for the expanded cable line-up, along comes innovation.

The eCache household has latched onto Bravo’s Top Chef. We’ll get it out right away: Tiffani should win this thing (although I suspect she will not). But look at what this show does. Twelve “chefs” are chosen to compete for a feature in Food & Wine magazine, a Kenmore Elite kitchen, and $100,000. Each Wednesday night Bravo airs a new episode. Yes, the judges do not have final say and certain chefs are kept for ratings. Read the credits of the show if you are not convinced.

But none of that is new. Look at how Bravo caters to its audience. Each week, the Bravo web site begins a new forum thread to discuss the episode. Thousands of people read these fora. They banter back and forth. Just like Nascar, everyone has his favorite (fwiw, Tiffani is not well-liked.). Some view the show as a soap opera. Others are culinary experts. The show offers something for everyone.

The judges have blogs that give a “behind-the-scenes” look at what is going on. Frankly, they are just commercials to keep folks interested throughout the week.

There are recipes that the contestants have made during the week. There’s a sweepstakes and some other stuff too, including the obligatory wallpaper.

But what is truly wonderful are the videos that are shared (although boo for requiring IE). These provide that extra footage fans clamor for. And the fans are pleased that Bravo has finally shared the full argument between Stephen and Candice where she calls him a tool and a douchebag. Yes, it is the Jerry Springerization of our society, but isn’t it wonderful that television is finally onboard with providing a more full experience. It is no longer about the single hour aired once a week. The networks now have the audience’s attention much longer. Is it any wonder I know that Sears is a sponsor of the show? 🙂

. . . just remember, darling, it is pain that changes our lives