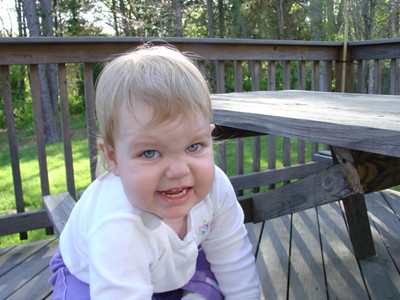 May has arrived and Beetle is excited. The illegal immigrant rallies did not affect her fun today.

Mommy usually calls Daddy at lunchtime. Today she informed him that Little Acres had called to report that Beetle had fallen and suffered a head injury. If you recall, on the last day of school last year Abby had fallen and we rushed to the doctor’s office. Today, we laughed it off. Apparently, she was in the gross motor room (gym for all us oldtimers) and fell off of something a banged her head. All reports indicated she was fine and just had a knot. That certainly appeared to be the case when we saw her and she acted as expected.

Beetle was in a grand mood when she got home. The weather has been great and after tearing up the house a bit, she and Mommy went outside to do women’s work weed the garden. When Daddy arrived home, Beetle wanted nothing but an escort to the the backyard to play in her house. As she played, she heard and then spotted all the boys next door jumping on the trampoline. We were told prior to purchasing our house that our insurance would be cancelled on the spot if it were discovered that we had a trampoline. Therefore, we never will. But oh how Beetle was interested. I lifted her onto my shoulders to better see what was happening. I think she wanted to join in.

After a bit we began working on dinner. With the advent of the nice weather, it was time to break open the grill for the season. Earlier, Mommy had marinated some chicken legs in a garlic herb marinade. Daddy fired up the grill and cooked them while Mommy prepared mashed potatoes, peas, and a salad.

Beetle displayed some newly learned talents. She can open the screen door by herself. She would prefer not to close it so she can have easy access to the inside and the outside. After shutting the door about 100 times, Mommy and Daddy finally closed the glass door. Beetle was not amused. Eventually, she settled down and played on the deck as Daddy grilled. Then she demonstrated another new talent: she descended the deck’s stairs to the yard. Our girl is very mobile these days. She headed right for the fence to see the trampoline. She looked through a knothole.

After a while, she came back to her playhouse. She likes it!

We sat down for dinner. Beetle is making the sign of the cross much better these days. Without any forcing, Beetle ate chicken. More and more, she is liking it. She ate tons of peas, shunned the potatoes for the most part, had a thing of yogurt (what meal does not include go-gurt for our angel?) and then she requested applesauce. We think she is in a growth spurt. Beetle certainly appears to be taller. And my how she motors around these days.

Yet, Beetle has been reluctant to walk from the car to her classroom the last week or so. Daddy doesn’t mind carrying his little girl, but for one who used to trot along happily, she desires to be held now. Yet, another phase . . .

Beetle has been playing with her baby doll and one of her cows a lot recently. The doll travels at great speeds in the doll stroller. Beetle happily pushes this contraption around wherever she goes. A dish towel serves as the blanket. Beetle has to have it just so. Up and down the towel goes until it looks as though the doll is a resident at the morgue. More and more the cow is receiving the same treatment. I keep sharing that when the cow dies he becomes hamburger, but Beetle hasn’t pieced that together yet.

Beetle is helpful. She has learned how to throw things away. Since Daddy doesn’t like anything to do with diapers, this has been a godsend. Mommy will not keep the diaper container in Beetle’s room because of the stench. So, after changing Precious, the rolled up smelly diaper ends up on the floor. Beetle then picks up the diaper and walks it to the container in the other room. She’s earning her keep. She also was trying to weed today. We figure that by five or six she’ll be mowing. Daddy is looking forward to that!

Beetle had a bath tonight. She has been a bit difficult of late taking a bath, but Mommy resolved that. She purchased Beetle an alphabet for the tub. That has kept Beetle from wanting to escape. Look for Beetle soon enough on ESPN for the spelling bee.

We like our little girl. She is fun to play with.

Revenge is a confession of pain.