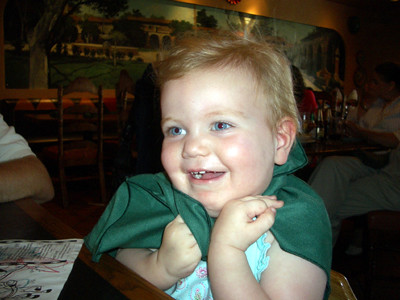 Our family enjoyed a wonderful weekend in Maryland/DC.

After a hectic few days, we received the all clear from the doctor on Friday that Beetle was A-OK. The current thinking is that Beetle did not have an UTI but rather a virus. Given that she broke out with a rash over the weekend that seems like the correct diagnosis.

We got off to a later start on Friday than we had planned. We waited on the doctor, then Beetle napped. Daddy was out running errands and it took longer than it should. Eventually we all gathered and shoved off. It was a straight shot and we missed all the traffic.

Aunt Kim and Uncle Mike were happy to see us and we them. Beetle went to bed soon after we arrived and Mommy and Daddy visited.

On Saturday, Beetle stayed with Aunt Kim and Uncle Mike. She had a blast! They went to the pool and Beetle demonstrated her swimming prowess. Beetle has been shy with Uncle Mike recently, but she clung to him at the pool. Uncle Mike is a good protector! While Beetle frolicked at the pool, Mommy and Daddy visited Washington D.C. We went to the White House to see all the loonies demonstrating outside.

Once we all arrived back at the house, we decided to visit Bugaboo Creek Steakhouse. Ever since Daddy met Mommy, Mommy has shared how wonderful this restaurant is. Daddy had doubts. The family decided not to dine there when we visited Maine. And last year when we visited Aunt Kim and Uncle Mike, Bugaboo had had a fire and we couldn’t go. It’s been a running joke that this place doesn’t really exist.

But it does and we had a lovely dinner. Beetle had a cheeseburger, Mommy had a burger, Mike a sirloin steak, and Kim and Daddy had prime rib. The prime rib was delicious. Bugaboo has animals mounted on the wall. Some of them move on occassion. Beetle was fascinated with that. The woodpecker would knock at the wall. In the other dining room there are apparently more of these moving animals.

On Sunday we had Panera bagels. The Asiago cheese bagels are awesome! We had never heard of this chain before. South Jersey is behind the times. After breakfast, we went shopping. Mommy and Daddy shopped at Old Navy for new clothes for the trip to Kansas.

At lunchtime, we went again to Guapos. This Mexican restaurant is a lot of fun. It is on a pond with lots of ducks. It was busy and Beetle relished in playing. But she took Daddy’s napkin, spilled a beverage, and then became cranky waiting. It was mid-afternoon and Beetle was not doing well without her nap. Lunch was served. Beetle continued to be cranky. Mommy and Daddy took turns sitting with Beetle and looking at the ducks.

Beetle decided she wanted her shoes off and then wanted to run around. When she got to the blacktop, she found out it is hot baking in the sun. Beetle cried. She was so cute as she realized her feet were burning.

Everyone eventually completed lunch. Daddy was most impressed with his stuffed chili. Yummy!

Then it was time to go. We were sad to go. We enjoy Aunt Kim and Uncle Mike. Once again Beetle, they spoiled you. There were lots of presents purchased. You have a new Little People dollhouse, an outfit, and a ball that you were enamored with at Toys R Us.

Thank you Aunt Kim and Uncle Mike for a wonderful weekend. We always enjoy your company.

Photographs will be uploaded when we return from Kansas. Pssssst . . . Kim and Mike . . . would you e-mail us some of the photographs you took?

One thought on “Fun with Aunt Kim & Uncle Mike”

We have never relied on federal, state or county funds. We wanted to do this on our own and we did.