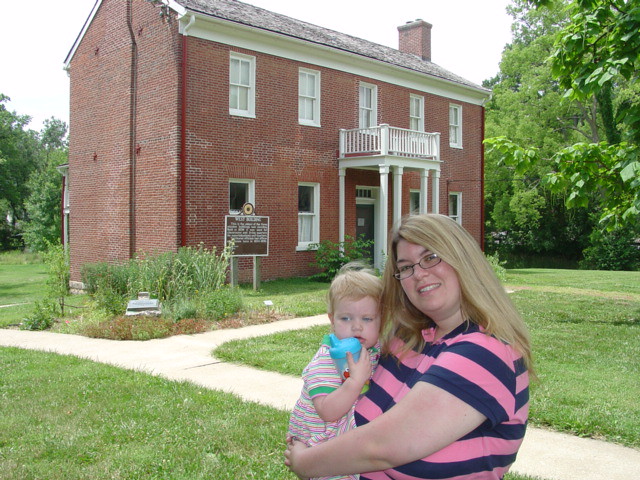 Our day began with a breakfast and then our first trip into the city area to sight-see. We visited a historic Indian Mission site where pictures and coordinates were recorded for GPS Games. The stop was brief but productive. It was evident that the day was going to be a scorcher and we decided to refresh & energize ourselves with some famous KC BBQ.

The atmosphere with fire-ovens filled with meats-a-plenty and sweaty men slicing, scooping, and otherwise preparing our plates at Arthur Bryant’s added to the feast — pulled pork sandwiches, baked beans, cole slaw, and fries. We sampled the various sauces (Bob preferred the Rich & Sassy) and left stuffed. Cousin Parker was quite disturbed that someone had dropped their gum right where he was walking. He worked hard to scrape the ooey-gooey mess off before returning to the van and vowed never to toss his gum where others might step in it.

We headed to the Country Club Plaza and saw our first fountains. More pictures were taken and then we meandered around the plaza. Tiffany’s was a popular spot for pictures and browsing. Bob wasn’t cooperative as Gert admired and tried on the $53K ring. Aunt Patty seems to attract old ladies who like to talk so she and Beetle stayed outside and visited with a woman who was first attracted to adorable Beetle and then proceeded to share her whole life story with Aunt Patty (including details about her arthritis, how many children she has, and how much money they make). Escaping was slowed because Aunt Patty couldn’t figure out how to unlock the stroller wheels but Cousin Parker came to the rescue. We saw some more fountains and an artsy-fartsy cow. Kansas City has joined other cities in displaying large critters painted with various motifs and scattered about.

It was really hot — mid-90s — so we departed the Plaza and stopped at McDonalds for air conditioning & a strawberry shake for Beetle before heading back “home” for a much needed nap . . . for BOB! The early morning, the interview, and the travel adventures the day before had caught up with him and he needed to rest. In the mean time Beetle, Gert, Cousin Parker, and Aunt Patty headed to the community pool replete with water slides and a lazy lagoon. Beetle busied herself for a couple of hours in the toddler area splashing in the water, sliding down both the shark & tube slide. She was truly in her element there — not needing any help to climb the stairs or negotiate the wheels and hoses used to shoot water about. She rolled in the water, played Ring Around the Rosy, and stomped on the water spouts around the edge. She laughed and giggled and didn’t even realize that Mommy had slipped away to enjoy some more grown-up fun in the main part of the pool with Parker. There are no pictures from here because this goofy establishment seems to have banned cameras to “˜protect” its patrons from predators: odd rule but we complied.

A fool shows his annoyance at once, but a prudent man overlooks an insult.