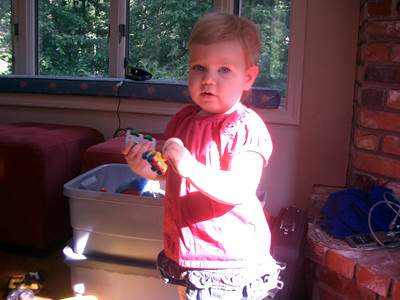 Beetle, Patty, and Bob got some much-needed rest as we took Friday morning off from active exploration. Parker had a minor procedure done to remove a lump from his knee. Little did we know that he would be milking this surgery for days trying to get out of all sorts of tasks.

Beetle liked the chance to get to know Uncle Jeff who joined the crew for an extended weekend.

Then Bob, Parker, Patty, and Jeff took off in the Lexus to explore some more caches — we liked the upscale caching mobile. The Kansas City area is full of caches. It was quite the scene as Jeff pointed out all the poison ivy and poison oak as we searched for a traveling ammo box in the woods. Patty scolded him for his annoying comments and Bob scored the find!! Woo hoo!! We drove directly to the Leawood Community pool to scrub arms & legs which seemed to work as no one has shown signs of a rash yet.

Bob was wary of parking in a residential neighborhood, with out-of-state plates, carrying an ammo box and other equipment as he re-placed the traveling cache. It did seem like an odd scene. However, he was successful and we returned home to “Bobby’s Girls.”