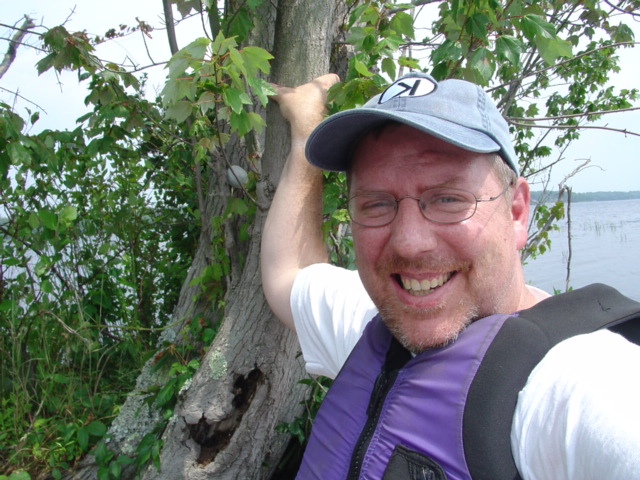 Of course, I haven’t cached Wharton in months and on the first day out in ages, a new cache pops up in my backyard. After my day in Wharton, I went out for an errand and drove down to the docks just to see if any cachers were around.

Sure enough there were. I met Gypsee and Dan. They had just come back from finding the cache. The reason for the cache was that Tom had just sold his kayak to Gypsee and she picked up at Union Lake a few days previous. On that day, he hid a cache for her. One might have thought it odd that a cache showed up there mere days after the one I hid was listed. Only a cynic would have believed that. 🙂

The following day I went out during nap time. In some ways this is a better cache than mine. It’s slightly more than a mile to the cache from the dock. That is good. I had fun with the paddle.

But sure enough, when I got there, there was a muggle nearby. This is a fishing hole and there is no way to disguise what one is doing. Long ago I adopted the policy: if they hide them in these places, I will find them. Who cares who sees?

I had thoughts of pulling mine, but I am now leaning more towards always having terracaches listed and only listing a couple at GC.com come my cacheversary.

Anyhow, I enjoyed the paddle. I am becoming more and more comfortable paddling. I made it back just a little before the heavens opened up.

It’s about the other person, not about you.