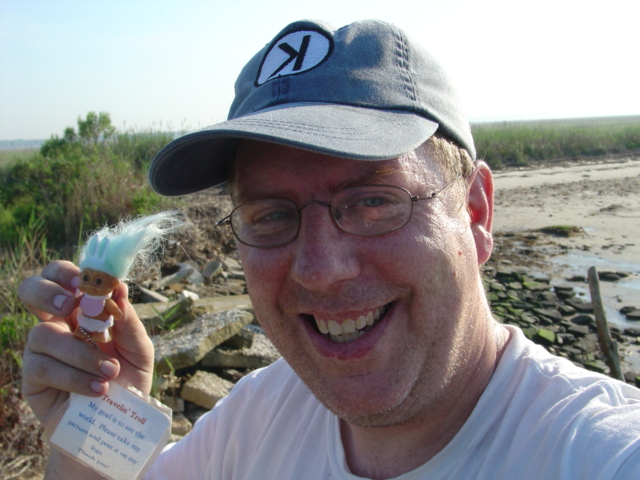 Ah, the “other cache” out here.

This was the jewel of the day and well worth coming to. Much like Thompson’s Beach, this one is a long hike out to a former town along the Delaware River. Apparently, there was a hotel here at one point that went out of business when the state decided not to maintain the road in any longer.

Interestingly, after the first cache along here, there were more puddles, but then they disappeared and a paved road in pretty good shape appeared. The WMA sign stated this was Dennis Creek West.

As I zeroed in on the coordinates, I had suspicions that this was going to be a needle in a haystack cache. There’s a lot of broken concrete along here and a cache could be anywhere. But I began with how I would have hidden a cache: high and easily found. Sure enough, Rob had done the same.

The flies were out in force and I kept swatting as I signed in. The view here is spectacular! The bayshore is a wonderful place and a great place for caching. Rob did a wonderful job putting a cache out here.

— John Denver, Sunshine On My Shoulders