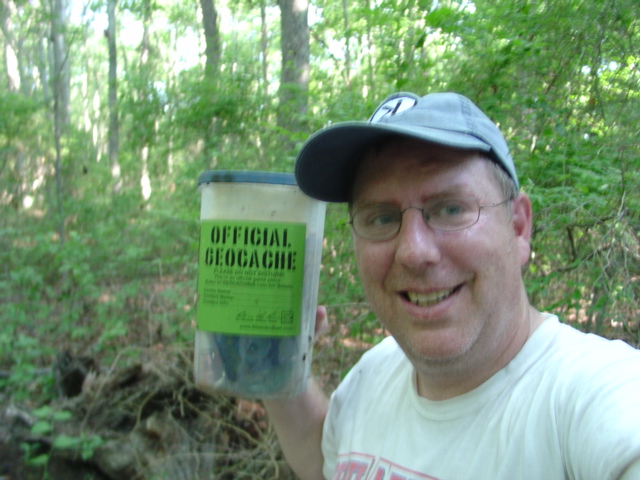 I had placed a matchstick container in a tree back at the point in this area. Rob incorporated that into some multi that went MIA. Then he had the night cache in the same area. I guess that went MIA too. Then he hid this one. I was in no hurry to get down here again as I expected it to be essentially the same cache.

But when I planned the day I saw it was going to be closer. I imagined it was in the clearing area that I had investigated a bit once (maybe with Ski). I was surprised to find it wasn’t even that far in but rather on the stretch right near the intersection with Matt’s Landing Road. I gather this is because the “road” has been piled up to keep people from driving down there. Hmmm . . . wouldn’t that now be a good location to place a cache making people work at it?

Anyhow, I walked in and negotiated the briars. It seems to be Rob’s current M.O. is make cachers work through them.

The cache was easily found. I liked the Piney Pirate sticker on the cache itself. The container was a plastic Rubbermaid-type container with the rubber seal. As I recall, there was nothing of consequence in the cache.