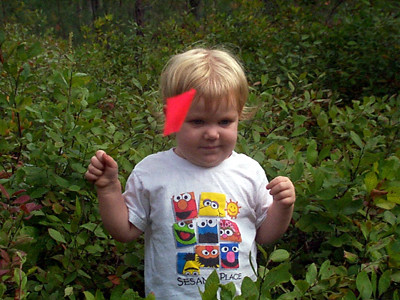 What? GeoVexilla. This is a long-awaited new GPS game and Beetle and I took off today to enjoy it. The game is similar to geodashing and Minute War in the field; it is the scoring an object of the game that is different.

Random waypoints are generated. Each one is associated with one of about 200 flags. We use the flags of the world. Each flag is part of a five-flag set, usually geographically located. For instance, Honduras is grouped with Palau, Haiti, Nicaragua, and the Cayman Islands. If you can get yourself within 100 meters of the waypoint, you have gotten close enough. Usually, we try to get as close as possible, but 100 meters is “good enough”.

The first flag found in a group (these are virtual flags) is worth one point. The second, two points, the third, four, the fourth eight, and the last is worth 16 points. So a set is worth 31 points.

Not all flags are equally distributed. Therefore, trading is encouraged. Someone who plays the game in Europe will probably have multiple British flags. I may need one of those and trade a second Canadian flag.

Today was the launch of this game. Beetle and I headed out for a couple hours to see what we could do. There were four flags in our area (they change over time). I thought we could get three of the four. It turns out we got two of the four.

The first was on the grounds of the Fairton Federal Prison Camp. We got to .72 km, but no closer. Beetle kept asking, “What’s here?” We saw a real live prisoner . . . from a distance. So, the Tanzanian flag remained.

We took off down toward Belleplain to Hunter’s Mill Road. The Honduran was just a few feet off the hardpack road. Beetle had a blast. We used the flag that Aunt Patty made for us. Beetle wanted to wave it and did such a good job, she removed the survey marker that was used as the pole and played with that.

From there, we headed near Head of the River. We drove in another hardpack road beside a tree farm. I didn’t realize it at the time, but I had been down here long ago in the Mercury. Anyhow, we had to bushwhack a little to get within scoring range. Beetle is too big to hoof too far with flags, GPSr, bag, etc. while in the brush. That, plus protestations from the little girl that she wanted down.

Once down, she waved her survey flag far and wide. She seems to understand about having her own flag. She kept saying, “My flag” when referring to that and “Daddy’s flag” for the one I had. We only got to within 87 meters so we didn’t have to go any further. Beetle was cute standing in the laurel.

Then we headed to Weymouth. The maps showed a road that was not there and when I found another, it was gated off and posted. We tried several approaches, but all were the same. I was surprised we weren’t going to get this one. It appears the land is owned by the Atlantic Blueberry Company. As we came out of the woods, the blueberry bushes spread far and wide. I love the looks of them. The leaves are a dark red.

So off for home we went. Beetle crashed all the way back.

This morning Mommy went grocery shopping alone. That was a mistake as we ended up with a huge grocery bill . . . and an issue at home.

Little Miss Muffin, cute as the dickens, came in and started talking about pee in her pull-up. She has not had a great couple days regarding that. Then she said, “Brown back there” and pointed to her butt. Sure enough, a massive log sat there for Daddy. This was not poopy time and it should never be in the pull-up, dearest Beetle. What a mess!

Yesterday we had the house power-washed. I still find this an odd thing to have done. The green stuff was on the west side of the house and was noticeable. Larry did a very good job. He and our other neighbor commented about how nice the windows look. 🙂 We also discussed painting the front door. While one might think we should do that ourselves, we saw a front door painted by the homeowner (a family member) that did not impress us. We are opting for a professional so we do not see streaks.

In the afternoon we stopped by St. John Bosco church for their carnival. It was a bit unimpressive, but Beetle had a good time. Beetle enjoyed the choo choo and rode it several times. There was also an airplane ride she liked. Daddy and Beetle went down the big slide in a potato sack. It was steep and we fly off the end of the ramp! Beetle tolerated us holding her up to the cutouts.

We’re the middle children of the history man, no purpose or place, we have no Great war, no Great depression, our great war is a spiritual war