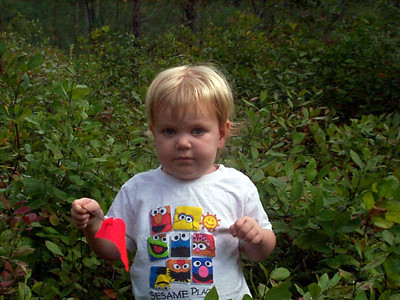 After capturing the Honduran flag, Beetle and I headed over here. We should have remained on Hunter’s Mill, but I thought it would be better to circle around. That put me on the wrong road, so we doubled back. Frankly, I am not certain what the best way would have been.

It wasn’t until long after we left that I realized that this was the area of a cache that I liked. Heck, that was more than four years ago I sought that and I’m old, so I can be forgiven I hope.

We drove down the hardpack. Alongside the road was a tree farm. Most of the trees appeared small. Once we cleared the private property, we saw the familiar NJ forest signs. I think this is part of Belleplain State Forest. It is possible it is Peaslee.

Of course, this area looked dense. I drove by looking for a path of sorts. Nothing doing. We came back and parked parallel to the flag. We were about .14 kilometers away. I strapped on the bag, picked up Beetle, then the GPSr and headed in.

Bushwhacking with a two-year old is fun. She kept calling “Down”, but she would not be able to high-step through the laurel and the downed trees. Once we were within range, we stopped. She wasn’t going to put up with being carried 100 meters through the brush and I wasn’t going to put up with her demands. She had procured a flag of her own and was whipping me with it.

So down she went in the brush to see if she could attract any ticks while I took out the camera. We settled at 87 meters. This is typical South Jersey terrain: lots of pine trees, laurel, and other brush. Beetle had fun waving her flag. 🙂