For every cache one person is the first to find it. Determining who was the first one to find it has been problematic. Because it is, I do not consider it at all. Unfortunately, others place a great deal of emphasis on who is first to find the cache. That emphasis is nothing more than bragging.

That’s what FTF has become: bragging. I disdain it.

I’ll run through some of the issues involved with FTF, but in the end, claiming or awarding FTF is nothing more than bragging.

Definition
FTF stands for first to find. In geocaching parlance, it represents the first person to find the geocache. It seems rather straightforward, doesn’t it? It isn’t always as easy to discern, as we shall see.

Issues
Issues abound with the FTF race. I will chronicle some of these here.

My Loss
The FTF race heated up at some point in South Jersey. I never mentioned FTF in a log, yet I was dragged into the FTF race.

Found that Frolickn beat us to it

This one isn’t any more than two miles straight down the road from our house, and Fro still beat us to it!!!!! Some day we will be first to find. Maybe we need to get up at 5 a.m.? T.N.L.N.

There were others too. I was curious by the fascination others had with FTF. I asked many of the questions above three years ago. And those questions were asked in the discussion area of this site. Back then the local cachers participated here. No one wanted to offer an opinion then.

Eventually, I saw the end of being drawn into this race as I ceased logging online. As I have said previously, I believe the game would have been better if there was not online logging. Much to my chagrin, however, that didn’t satisfy everyone.

A friend of mine took great exception to me finding caches before others and not logging them online. He was so outraged he suggested I should not seek a cache until someone else had logged it. That was mid-June 2004. Obviously, I did not agree.

Some of his frustration stemmed from a cache he found in September 2003. He drove down in the middle of a hurricane to score a FTF. When he opened the logbook, he found that I had logged the cache two days earlier. That was one of my experiments I mentioned in the comments of this post.

We exchanged a couple e-mails in June 2004 about this. When he shared his indignation at my logging practice, I asked him what was lost? Whether I had logged the cache two weeks, two days, two hours, or two minutes before he did, it did not matter. What was lost? Did he not enjoy the cache? If not, is that a function of not being FTF? Just what about the experience was ruined because he did not know ahead of time he wasn’t going to be FTF?

None of those questions was ever answered. I never heard from my friend again. At least not directly. In August 2004, he posted a screed against me that was public to the local caching community, but not to me. As the very last exchange I had with him was about FTF, I have to believe that is why I fell out of favor with him.

To recap, I was dragged into the FTF craziness and when I bowed out, I lost a friend. Then came finding that pages from logbooks were removed that I had signed. I highlighted one cache that happened on, but I know of a few others too.

Now I was in a situation where if I didn’t log online I was ostracized, if I signed the logbook, I was targeted. I took the opportunity (coupled with some other things) to bow out altogether. Now I find out that I do not count.

Ghosts in the machine who find caches but don’t sign the log don’t count – it’s very hard to prove your first if your name aint on the first page in the book. (Anyone can take a picture of a blank page in a log book – doesn’t mean it’s the first page in that log book so I don’t buy that as proof positive.)

So, what am I to do? If I do not play it certain people’s way I end up not counting. It’s interesting as my former friend stated in his screed that I was trying to fit the local community to my own vision. Yup, leaving the FTF race saved me a lot of turmoil.

For the record, since the issue was highlighted above, I waited six months and then knocked on my friend’s door. I offered to buy breakfast and discuss things. He was on his way out caching, but asked me to drop him an e-mail and we would get together. I felt very good about the meeting. Yet, it has been more than two years and my multiple e-mails seemed to have fallen on deaf ears. 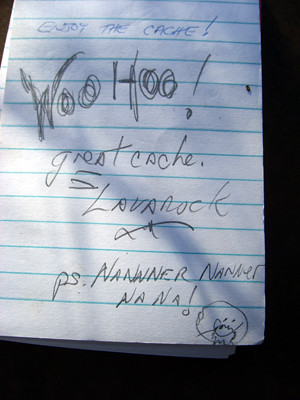 Rather than dwell on all the scenarios above, let’s look at FTF from a different perspective. What is it about being FTF that one feels so compelled to proclaim it?

Why can’t a normal log in the logbook suffice as to demonstrating who was first? Why must the taunting, the teasing, the proclamation be made?

Is there something about being first that necessitates stating it?

I mentioned to Frodo how I liken the FTF claims with those who begin a thread to highlight their own find count. It seems to me that we accept behaviors in this game we would not accept in “normal life”. If I introduced myself to you and stated I arrived at the cocktail party prior to you, what would you think?

What if I signed the guestbook at a funeral with a P.S. Nanner Nanner Na Na!

Why do we accept this behavior in our community?

As I stated at the outset, claims of FTF are nothing more than boasting one’s accomplishments. That one cannot truly know he was FTF seems to matter little.

The FTF race has affected me personally. It is no wonder why I loath the practice.

Dear reader, why does FTF matter to you? I knew long ago that I would have to play differently to enjoy the game. FTF was a consideration in that. It’s easy to dismiss me as an outcast/trouble-maker/dishonorable. Now that Frodo has indicated he is being castigated over the same issue two and one-half years later, can the community still take that stand?

Would it not improve the game if the players were cordial to one another? It seems to me that perhaps the community needs to bear some responsibility in this issue.

6 thoughts on “What Is Your Opinion of FTF?”

We’re the middle children of the history man, no purpose or place, we have no Great war, no Great depression, our great war is a spiritual war