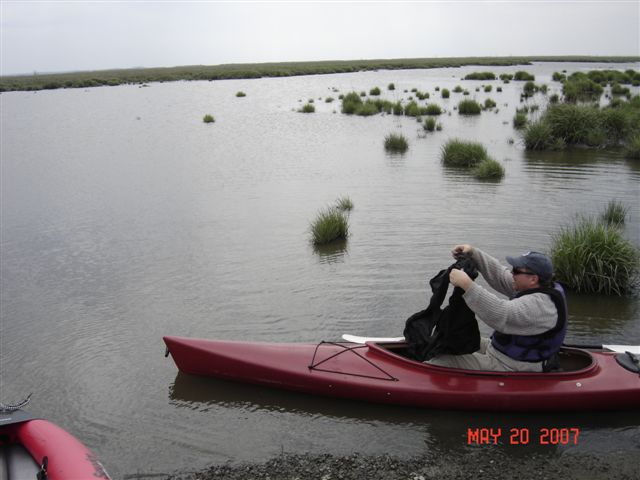 I am still recovering from my outing yesterday. I am a bit out of practice. While Lucy and I have been out this year already, it’s been for shorter calmer paddles. Today I was in for a long haul.

Ken solved the Take Me Out to Another Ball Game puzzle/research several weeks ago. He decided to come down yesterday to find the cache. I told him I’d meet him but that I had an engagement I needed to attend to immediately following.

We met at Thompson’s Beach (there’s a clue for you puzzle solvers). The tide was still out (err, another clue) so we headed off down the “road” to the T-5 geocache. I had placed this several years ago, but Rob is the one who listed it. Totally forgetting that, I had an interesting adventure “finding” it last year.

The birders were out today as this is the prime time to watch the plovers and red knots feed as they plump up from their South American voyage. At the gate, several capture nets were set up with transmitters set up to lure the birds in. Ken and I trudged through the mud and headed out to the beach on this overcast morning.

Thompson’s Beach is a pleasant location and it is early enough in the season that the insects were essentially non-existent. Ken and I had a nice chat as we slopped our way out. We investigated the chimney, took in the surf (at the time there were no white caps), and looked over the remnants of the former homes. Soon enough we were down the beach to the moorings before the bend.

Ken began looking for the cache. It is always interesting to watch someone hunt a cache when you know where it is hidden. After some time coming up empty, we looked together. There was a brick way at the bottom of the location the cache was. We thought perhaps the cache had fallen and was secured beneath it. It wasn’t. We looked around and saw no evidence of it. It’s one of those things that it is likely to have disappeared given it was never secured. That it lasted nearly three years without it is quite interesting.

We then headed back and saw the tide was up enough to launch. Soon enough we were waving goodbye to the birders, who all acknowledged it was a beautiful morning to go out kayaking.

We headed out past the osprey who were quite vocal. There were turtles popping up and down, a couple egrets, and some plovers about. As we came to the bay (Clue) I could see this was going to be no longer a simple paddle. The bay was kicking and white caps were all around.

So as not to give too much away, suffice it to say we headed to the cache and found it. The reaction when Ken found the cache is one that I will recall for a long time. He looked at me and said:

Yup. Ammo boxes are the ideal cache container. How many times has this container been under water? Who knows, but plenty. The sticker I had affixed has shown wear, but there was not a spot of moisture inside. Interestingly, Ed Scott commented on this just today:

Klatch: Apr 28 2007, 04:49 AM
If owners placing stream-side caches used ammo cans and chained or cabled the cache to a sturdy tree there would be little worry about the log condition or the cache going missing. Ammo cans simply are the best regular containers, where they are applicable. Make sure to paint out the military markings so as not to cause alarm with muggles. You will have a cache that can survive almost any weather for many years.

Ed Scott: May 21 2007, 08:46 PM
Although mine are not ammo cans, I agree that good placement and a good rope will keep them secure and dry. I have two that have survived the last two Schyulkill River floods. If it is on the ground near a river it will get washed away. The owner must expect that.

The paddle back was more difficult due to the tide. We were late getting back and I ate crow from Gert for that. She is good about my expeditions. I was sore when we got back. I am always sore from this particular paddle (another clue). The diehard birders were still there.

Gert and I passed one another along Buckshutem and it wasn’t long before I was showered, dressed, and back in Mauricetown for the balance of the day.

Ken was very kind to permit me to use some of the photographs he took of our day. Thanks Ken.

If anyone who solves the puzzle would like company on the journey, let me know and I will try to fit it into my schedule. I love this area. This is not for the faint of heart.

The flaw in the educational system, as far as I see it, is that you live your life – the teacher and student – in quest of A’s. Yet later in life, the A is irrelevant.