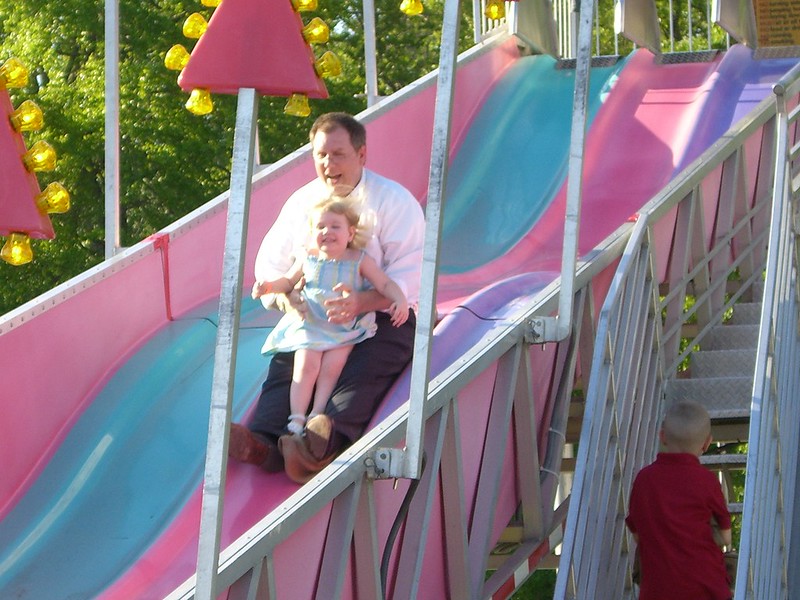 Our family looks forward to the Greek Festival each year. Beginning on the Thursday before Memorial Day, St. Anthony’s pitches a huge tent for food and music, sets up rides, and invites the public to have fun.

After meeting up at Grammy and Poppy’s where Beetle demonstrated she is ready to mow the lawn, we headed down the road. Beetle was very excited to ride the rides. But first things first. Dinner at the festival is the highlight for the big folks. Moose Kaka, Gyros, and other Greek favorites are always ready for us. Gert and Beetle had the combo platter and I had the gyro platter. Yummy! Full, we skipped dessert for the time being and headed for the rides.

Beetle likes slides and it was known all over that she wanted to go on the giant slide. Gert purchased her a wristband so she could ride all the rides as frequently as she desired. Beetle and I headed up for the slide. What fun! I like sliding with my girl. But after the first time, Beetle announced she wanted to go solo. Our little girl is indeed growing up!

The second time I walked up with her, but Beetle descended on her own. After that, she walked up herself over and over. Adults all over marveled at our little girl and her determination to be like the “big children”.

One of the things I really like about events like this one is that we see so many people we know. Brittney was there with her grandparents. She was really helpful with Beetle and rode many of the rides with her. We saw co-workers, students, old friends, etc. I like community events like this one!

Eventually, we were able to steer Beetle away from the slide to other rides. Then came the Fun House. Brittney took Beetle through this several times. The Fun House, however, attracts older children. One part involves climbing a rope ladder. Beetle is slow doing this compared to the older children. One time through the line backed up a bit because Beetle was still climbing. One boy called out, “Let’s move it slowpoke!” Grrrrrrrrrrrrrrr! If I could have grabbed that snot-nosed boy he would only be able to eat through a straw. Instead, I informed him that she was a little girl and he needed to be patient. (The little ass$^*#).

There were more rides. We then decided it was late enough for a school night. We fetched our desserts (included in dinner price) and saw some more friends. Beetle was tiring, but spotted the rollercoaster. Mommy and I had already determined Beetle wasn’t quite big enough to ride this. That did not sit well with our little girl at all.

We eventually bribed her with a pony ride. It didn’t look like much as the children were plucked off the backs of the ponies after just a couple times around. But timing is everything. Beetle had a nice long ride as the ride cleared out after she was on it. Perhaps she passed gas . . .

We came home exhausted. Beetle was whiny, Fritz was hungry, Mommy pooped out early, as Daddy fell asleep in his chair (but notice who is up updating).

This is the day
Of the expanding man