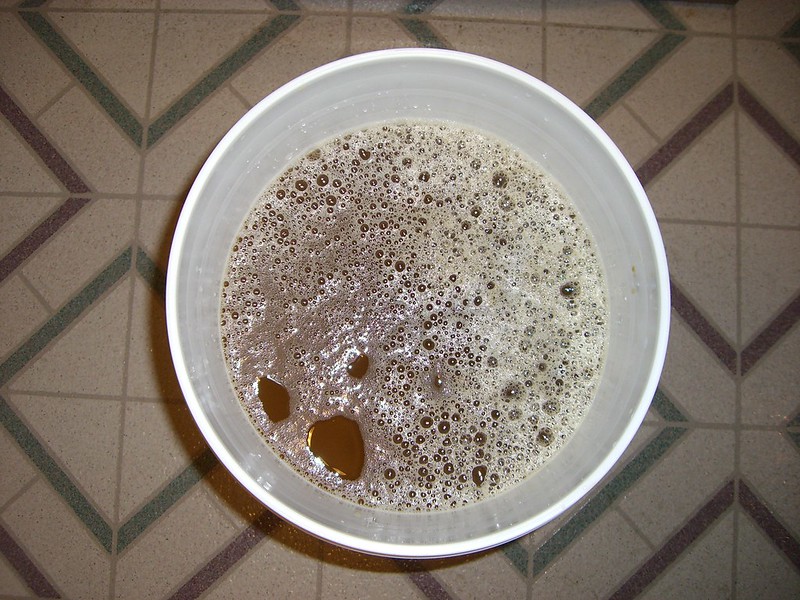 Totem Clan posted an idea about hosting a homebrew geocaching event 10 days ago. That thread got me thinking about homebrew.

About 12 years ago I bought some equipment and made a few batches of homebrew. I recall a decent pilsner and a hard cider that was very good. I lived in an apartment at that time. The equipment took up a lot of space and when Gert moved in the beer equipment moved out.

Now we have a home, two children, and once again I am interested in brewing.

Since Totem Clan posted, I have been reading all about brewing. It seems like a few things have changed since I brewed, most notably priming sugar is not needed in each bottle, but can be added directly to the beer. Also, the Internet seems to have brought a wealth of information that was not as available back then. It has served me well.

Lots of folks point to John Palmer’s How to Brew for beginners. I found this to be extremely helpful.

As I age, I do not rush out (or at least I hope I do not) and buy everything that is needed for a new hobby. I continued reading and planning. I decided to hold off on the bottling equipment. I so want to keg my beer. I am not certain I will end up there this soon, but I am still researching. I still had my brew pot. I knew all I really needed was a fermenter and ingredients. I bought those today. I should have picked up a thermometer too.

I made the pilgrimage to Williamstown (much easier now that I geocache) and picked up what I needed. I had expected to purchase a stainless steel brew pot, but didn’t see one.

They did not have the Amber malt my recipe called for so they substituted another extract and a half pound fresh malt. That meant I would be steeping. They also changed around a few of the procedures. As an OCD boy, I didn’t like this. I want to follow the damn recipe word-for-word initially before I modify.

I came home and referred to my online resource for help. These guys answered all my questions and I felt at ease.

After spending the balance of the day with the family (air show, ice cream, etc.), it was time to begin.

I sanitized everything I needed to after scrubbing a couple others. I then began boiling a couple gallons of water. As I did, I realized that the brewstore told me to toss in the grains and let them steep as the water boiled. That didn’t sound correct so I checked online. My reading indicated that most folks steep in less water than I had going. So I took some of it out and began a second pot. I also waited until the temperature in the first brew pot was 150°F before I put in my “tea bag”. I kept checking the temperature with a meat thermometer to ensure I did not hit 170°F, apparently when the tanins break and add acidity to the wort. I steeped the grains for 30 minutes.

10:00 p.m.
I rinsed the “tea bag” with water from the other kettle and discarded the grains. I drew a cup of water from the second pot for the yeast and then poured the nearly boiling water into the wort. I now have approximately three gallons of brew right now.

I brought the wort back to a boil. Once there, I shut the heat off and added six pounds of dry malt extract. I stirred thoroughly so there were no chucks in the wort. Once done, I turned the heat back on.

10:53 p.m.
The wort returned to a boil and the bittering hops were added.

It seems to me it took some time to get back up to a boil. Once I put the burner on high, it was soon there. I was trying to avoid scorching the wort. I have set the timer for 60 minutes. Ten minutes before that I will add the finishing hops.

Afterwards, I began assembling the ice bath. I couldn’t find the drain stop so I ran upstairs to get the one for the tub.

I removed the hops, shut down the boil, covered the pot and placed the wort in the ice bath made in the kitchen sink.

Meanwhile . . .
It’s been a while since I have had a Grolsch. This is a beer I recall my father telling me about. Dad wasn’t a big beer drinker, but he told wonderful stories about his youth and Grolsch.

12:15 p.m.
I was surprised the wort chilled so quickly. The wort was cool to the touch.

I pitched the yeast, sloshed the wort in (rinsing the Pyrex glass the yeast had been in with the wort), and topped off to five gallons with cool tap water.

At that point the fermenter was set. I attached the lid, filled the airlock with vodka, and placed it in the hole.

It occurred to me that I might want to take a hydrometer reading before I put this in the basement. But without a thermometer, I am not certain that reading will mean anything. I have a question into my brew buddies. Time’s a wastin’, I think it is a lost cause at this point.

Monday 8:23 a.m.
It appears there is a little activity in the airlock. It’s not quite like I recall, but I am not using a blow-off, so that may explain the difference. Or it may just be at the beginning of activation.

Wednesday 5:18 p.m.
After more than three and one-half days, fermentation is finally evident. I have been a bit concerned and began asking on my brewers’ board. I was put at ease as it seems that my basement is so cool that fermentation is slowed. No biggy as things are now where they should be. It is very exciting!

I know that all things pass