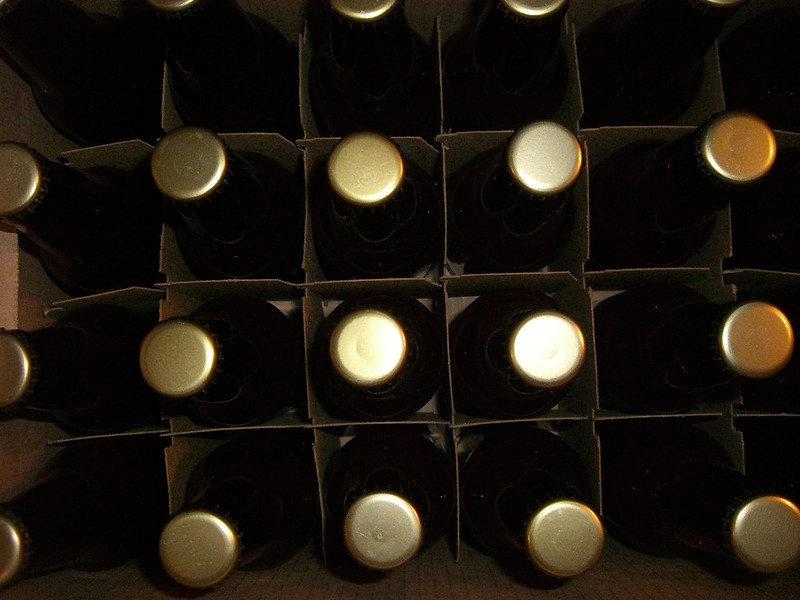 A little more than three weeks ago I brewed my first homebrew in a dozen years. I was supposed to have bottled it last week, but time got away from me. On Friday, Beetle and I drove to Williamstown to pick up some supplies. The store did not have everything I needed. On Saturday I drove to Richland. I knew the country store there had some supplies. I was more than impressed; they certainly had as much in stock as the Williamstown store, if not more. And with it being two towns over as opposed to a 40-minute drive, well, I found a new place to frequent.

But I got lazy and did not bottle until now. I knew it was going to take a while and just did not commit to it. But time’s a-tickin . . . the children went to sleep and so did Gert. Then I began.

I had washed my bottles in the dishwasher yesterday and they were still there waiting for me. I first sanitized the spigot. After attaching it to the bottling bucket, I added sanitizer to the bucket. Once sanitized, I added the water to the wallpaper tray I purchased the other day. In there went the siphon, bottle filler, etc. While they sat, I boiled some water and priming sugar.

I was nearing, finally, bottling, but had to sanitize the bottles still. Kegging is looking better already. : ) Bottle after bottle went into the tray. After soaking I rinsed. Repeat. Forty-eight times. Finally I was done.

I added the priming sugar to the bucket and then siphoned the beer from the fermenter. I went with an easy pale ale and knew it was full-proof. With no secondary I expected it to be cloudy. It did not disappoint. I will be repeating this ale soon with the addition of a carboy. That will demonstrate how well that will clear a beer for me. There was plenty of trub at the bottom. FWIW, the auto-siphon worked like a charm. The LHBS did not spare any tubing. I’ll probably pick up a long section next time out.

I drew a sample to measure with the hydrometer. I did not take the original gravity, but it did permit me to sample the beer. Flat and warm, but it did have a pleasant taste. I think it will be enjoyable to drink despite all the sediment in it.

The homebrew boards recommend filling over an open dishwasher door. Any spills will be on the door that way. Rather ingenious. With a spring-loaded filler, filling the bottles was a piece of cake. I filled six at a time and then capped them. It didn’t take too long before I had my 48 bottles done. I was about 1/3 of a bottle short.

Then came the big clean up.

My mother is looking forward to drinking some of this when she visits. Unfortunately, it really won’t be conditioned yet for drinking. We’ll pop a couple to taste, but the real drinking will not occur until July.

One thought on “Bottling Day”

Let me break it down for you, so you know what I say is true:
I make a goddamn difference! What about you?