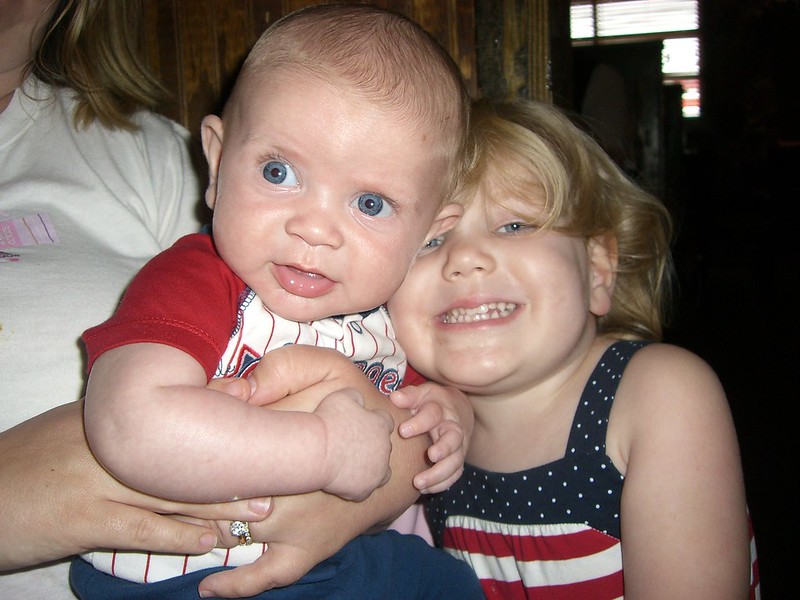 Beetle was off from school today, but that didn’t keep her asleep. I had moved to the couch when Fritz woke up in the middle of the night. I awoke later to my daughter pawing my face. It is not a pleasant way to wake up.

We futzed around the house for a bit and then headed over to Grammy and Poppy’s. We returned lots of borrowed stuff: tables, chairs, cooler, and iron. After visiting for a while, we decided to treat ourselves to barbecue on this festive day, despite it being cold and we being blah.

We dined at Longhorn. Aunt Amanda was nowhere to be found. We had Melissa for a waitress. We had her once before. Beetle was in a particularly friendly mood today. We shared a lobster and shrimp appetizer. I had a big rib-eye. It was good.

After our late lunch, we putzed around here some more. We brought the exerciser up from the basement for Fritz.  He is three and one-half months old; Beetle was five months old when she began using this.  Fritz isn’t real active with it yet, but he did get it to play music.  Beetle happily danced about with the music.

After Beetle went to bed, I went out briefly vexing (virtual capture-the-flag). It was very pleasant out tonight.

We grilled burgers outside and Gert made wonderful milkshakes when I arrived home. I watched the Independence Day special in Philadelphia (at the art museum); unfortunately, the downpour kept the fireworks from being set off.

If you aim at nothing, you hit nothing.