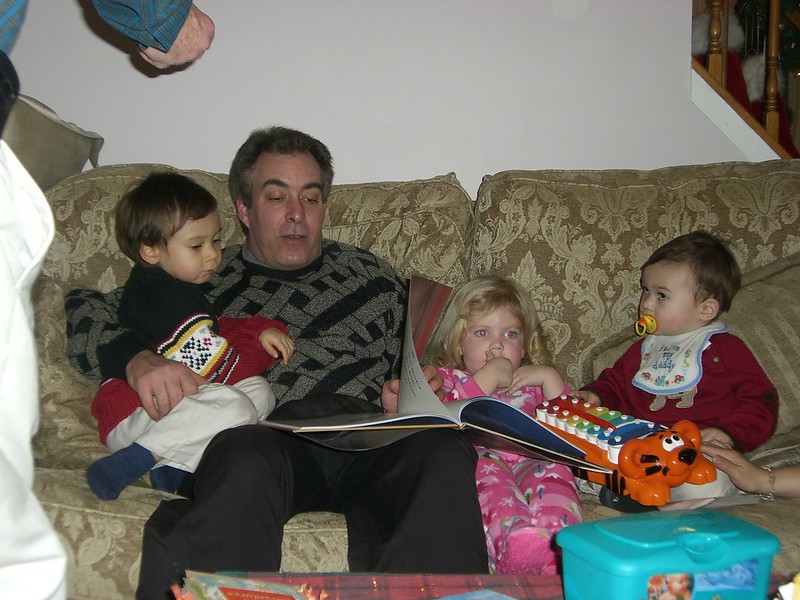 Santa has loaded up the sleigh and the reindeer have awoken from their nap. The elves are packing the bag. Down here in Millville, the honorary elves partied in celebration.

We cleaned up the house to prepare for the guests. Despite being older and wiser, Beetle still dislikes the vacuum. She covered herself when Mommy turned it on.

Tonight’s party was a little more low-key than some years. Aunt Kim and Uncle Mike are in Jamaica. Aunt Jill and Uncle Frank are at home with Cousin Timmy. But Cousin Renee was in town from Germany. Her new husband is deployed in Iraq right now, so it was nice she could be with family.

We had the traditional little sandwiches from Shop Rite. This year they were served on mini-sub rolls. Mommy was distressed, but they were a hit with everyone else. We had lots of chips and dips, punch, crudites, salami, pepperoni, and cheese, olives (a Robertson favorite), and trifle. We had peppermint candy shot glasses and Bailey’s Caramel to fill them, but we never got that far. Mommy also found wonderful crackers . . . filled with great gifts. Out flew toe nail clippers, tool sets, and whoppee cushions! They were a big hit!

One hardly needs Christmas morning after Christmas Eve. There were gifts everywhere! We exchange with the family this evening. More and more it becomes a festival for the children. We did not have a Pollyanna this year.

Fritz welcomed Uncle Jesse back into his life after shunning him the other day. They have always been best-buds, but they seemed to be on the outs before this evening. Beetle was her usual adorable self. In addition, she was very polite and appreciative of the gifts she received. There was but only one minor tussle when she became territorial when Cousin Sean wanted to play with something in her bedroom.

We sat for the traditional family portrait. Poppy did the honors once again. We ate, drank, and were merry. Uncle Bob read the children ‘Twas the Night Before Christmas. They enjoyed it.

Before we knew it, the party was over and it was time to prepare for Santa. Unlike previous years, we were not up all night assembling. Everyone was in bed before midnight.

Nights in white satin, never reaching the end,
Letters I’ve written, never meaning to send.
Beauty I’d always missed with these eyes before.
Just what the truth is, I can’t say anymore.