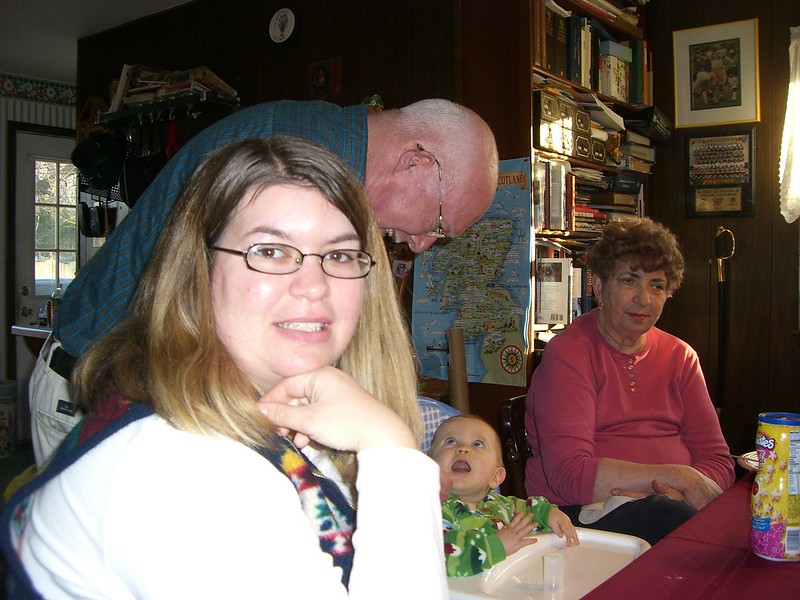 After opening presents and playing with our new stuff, most of us actually got dressed and headed for Grammy and Poppy’s for dinner. There was Aunt Kitty and Uncle Jesse too.

All the Christmas cheer had taken its toll on our little photographer as she crashed on the way over. She bounced back well.

After dinner Beetle was eager to play baseball. She really is competing strongly to be Daddy’s favorite. Beetle, Aunt Kitty, and I went out to play. Beetle is still a little green, but did hit the ball several times. Each time she received a huge hug from her very proud father. As we all know, hitting a baseball is one of the more difficult things one learns to do. We also reviewed Daddy’s cut as agent. Just so it is spelt out for reference, Daddy, acting as Beetle’s agent, earns 85% of the first multi-year contract Beetle signs. We figure she’ll be good for $20 million annually for six years. I think she could live comfortably on $3 million per year so Daddy can retire.

After the ball playing, we headed in for photographs and another viewing of A Christmas Story. Beetle is quickly becoming a fan.

Meanwhile, Fritz had everyone fawning over him. We are rather certain he is the cutest baby. He is still dogged with illness (we suspect another ear infection, but the pediatrician was closed yesterday.), but one would never know it. He is always smiling, clapping, and exuding a positive attitude (he obviously gets the latter from his mother).

We had a nice lazy afternoon. We eventually left and mellowed out at home. We all will sleep well tonight.

Gambling only pays when you’re winning