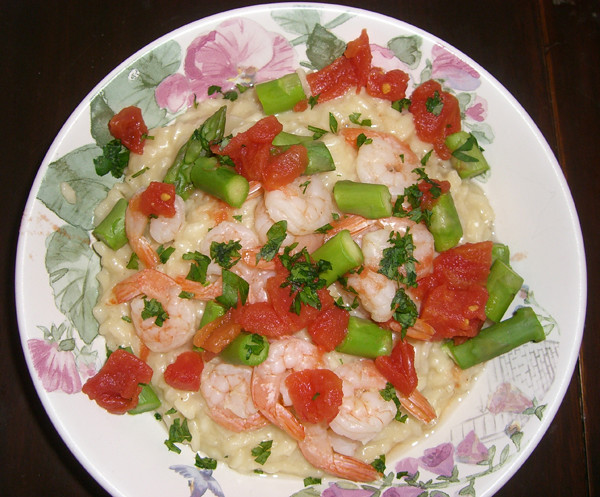 Several months ago I began preparing risotto. I am a huge fan. Since then I have prepared all sorts of different risottos. While visiting my blue hairs (I affectionately refer to those on one of culinary boards as blue hairs. I am sure not a one of them even resembles my grandmother) yesterday it was asked What cooking fad are you now in? I responded risotto. And since it had been a little bit since I actually prepared one, became all excited. While I have several to try out, I had been putting off one that flowers22 had recommended. Her family has enjoyed Olive Garden’s Shrimp & Asparagus Risotto several times. I decided that would be last night’s dinner.

Of course, things happen and that wasn’t made last night after all. Not to worry, tonight was another opportunity. I quickly refreshed my memory on how to make this. I’ll hand it to Olive Garden for releasing the following video. What an awesome way of promoting its business. I do not normally advertise for companies, but I’ll gladly share this. Enjoy!

This was awesome! Of course, the butter and Parmesan cheese added plenty of richness to this.

Shrimp is really expensive locally right now. I opted for a bag of frozen shrimp. Unfortunately, I did not look well at the bag I gabbed as these were tiny cocktail shrimp. Blech! The shrimp became a nuisance. I gave most of mine to Gert.

I always use Carnaroli rice for risotto. I am not certain why, but that is what we always have on hand.

The asparagus at the market, despite it being asparagus season, was not the pencil-thin kind I love. Nevertheless, the asparagus was excellent. I shunned fresh tomatoes for canned. More and more I do this, although local tomatoes will be available soon. I find most market tomatoes to be hard and tasteless these days.

I used stock I had made a little while ago that I had frozen. Bagged in two-cup bags, this was a snap getting the correct volume needed. Freezing permits for a weekday risotto. I’ll have to make another stock this weekend.

I do not know how well this risotto will reheat. I suspect it will not be as great as others. I’ll know tomorrow at lunch as I have a nice container prepared.

Treat yourself to this wonderful meal. I have found risotto to be a most satisfying meal.

It is not enough simply to go from here to there, from this moment to that one. We need our moments and our days to add up, to mean something, to cumulate.