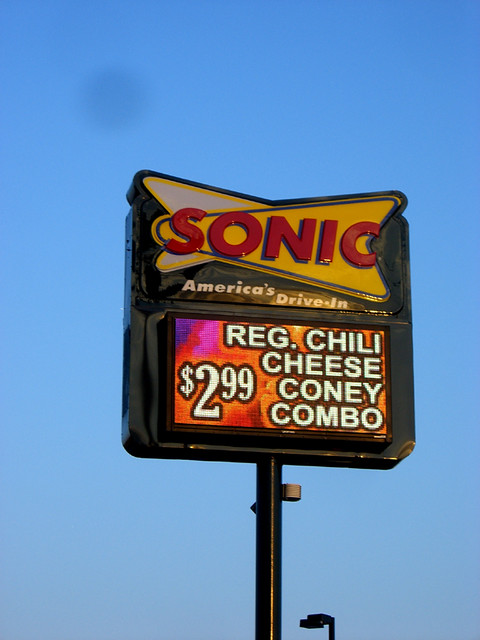 Driving home it occurred to me that I had not eaten all day and I was then famished. That I was in southern Delaware, I had Hardee’s at my disposal. I have a fondness for Hardee’s and decided that would make for a quick stop on the way home. The problem was that despite having seen a few during the day, there were none on my return trip. 🙁 Seeing as though I was running very late, I decided I would just pull over at the next McDonald’s I saw.

Well, the next exit had a McDonald’s, but it also had a Sonic. That was an easy sell; I have never had the pleasure of dining on Sonic food. There is only one in all of New Jersey and I have yet to stumble upon it on my outings two hours from home. It just so happens that the second Sonic in New Jersey is being built in my town, but it is not available yet. I thought I would give this a run through.

As soon as I pulled off I realized it was going to cost me to re-enter the highway. Grrr . . . I contemplated just going on Rt. 13 north until St. Georges. This would have afforded me a quick stop at Dover Downs. I wanted to snap a photograph of the monster there. But as it was, I was already going to be home after 9:00 and Gert‘s patience was going to be thin.

I pulled in and realized that this was a drive-in, not a drive through. I was expecting a Checkers-like establishment. I love Checkers! I pulled in right next to another ’96 Explorer just like mine. Despite the problems with my truck, it looked immaculate compared to this other one.

Looking over the menu I opted for a cheeseburger combo. I saw they had onion rings so I attempted to order them. No dice, they were out of them. I was asked if I wanted chili and cheese. “Okay,” I said. I ordered a banana shake as well. The caramel looked good too.

It took slightly longer than I would have thought for the food to arrive, but it was not too long. A guy on roller skates delivered the food. I immediately saw that it was a good idea I was parked for this meal. The chili and cheese was on the fries, which was fine by me. Fortunately, I was provided a fork. The burger with the works was sloppy. But, oh, it was so delicious. The banana shake had plenty of chunks in it. I was most pleased with the meal even if it was a tad expensive.

Once home, I shared with Gert that she will love Sonic. She then explained she was familiar with them having dined in one in North Carolina. I must be the last person on the planet to have had the pleasure. The Coney Island dog looks really good for my next visit. 🙂

Whenever you are about to find fault with someone, ask yourself the following question: What fault of mine most nearly resembles the one I am about to criticize?