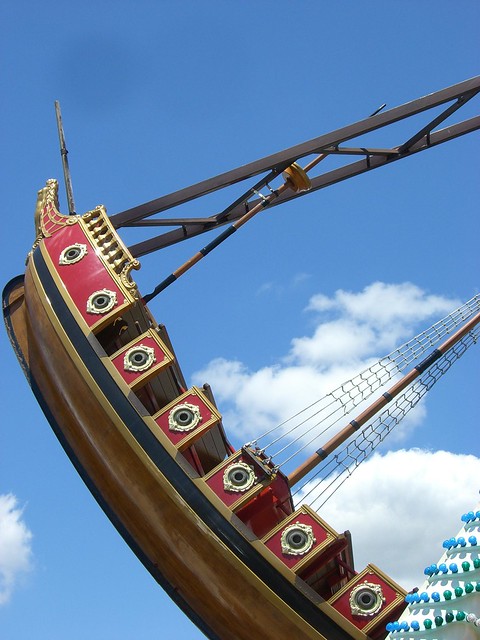 On Sunday we began a trip to Ocean City. We aborted the trip when the rain came. We re-scheduled for today. It was a perfect day; the weather was gorgeous and it being Thursday, there were few people. And it was Fritz‘s first carousel ride!

We found convenient parking and before we even hit the boards, we spotted an oddity. Daddy loves finding stuff like the airplane mounted to the top of a building.

We came with an agenda as Daddy needed some specific photographs so when we spotted the fortune telling machine almost immediately, Mommy was more than willing to play along. Beetle decided she wanted to play Skee Ball. I do not recall her being this spastic previously. She had trouble rolling the ball hard enough to make it into the holes. Then the ball began flying in the air instead of rolling. We were all amazed at this.

Soon enough we were out on the boardwalk again. It was crowded and we did not like it. There were six lanes of traffic. Bicycles and runners had large lanes in the middle. Pedestrians had two lanes on the outside that were narrow and not conducive to having a good time. We were most bothered by this. Soon enough, however, a loud speaker announced that at noon all bicycles had to leave the boardwalk. Once noon came, things were much more comfortable. There weren’t that many pedestrians. The bikes are the ones crowding things.

One of the joys of going ot the boardwalk is eating. Gert has found a love for the French fries. Unfortunately, she got them from Jilly’s not Curly’s. It makes a difference. We had Mack & Manco’s pizza, which is half of what going to OC is all about. We had Johnson’s caramel popcorn, Kohr Brother’s ice cream, lemonade, monkey bread, waffles and ice cream, and other treats. I finally found carmellows, a treat I recall from my youth.

Fritz, unlike his sister, loves pizza. He chowed on a slice. Not surprising, he was a mess by the end of his meal.

Another tradition we have is taking a photograph of Beetle in the flip flops at the Music Pier. She was all smiles.

From there it was off to Wonderland, the children’s amusement area. Beetle announced she wanted to ride the ship. We thought she meant the kiddie boat thing. She objected when we got there. She wanted the large pirate ship! My little girl does not ride kiddie rides anymore. We had to coax her onto one while Mommy used the bathroom.

Mommy has a Tilt-A-Whirl rider now. I cannot stand spinning, but Beetle is more than willing to oblige. After that, I took Beetle onto the log flume. She asked me to hold on tight. When we got off, she asked to go again. She is a thrill seeker!

Beetle wanted to splash in the water. This was not a beach day for us, but we convinced the beach tag person to let us on for a couple minutes. Beetle had fun splashing. We’ll return for a regular beach day so she can go in the water.

Afterwards, it was time for a drink so I had a martini.

As we headed back to the car, we ate and drank some more and Mommy indulged in the Christmas store. Nothing like Christmas in June. Fritz and I sat and people watched. It was a long day and Fritz pooped out for a minute before bouncing back with smiles. I think he saw a pretty girl. He’s such a flirt!

Even though he had sunburn, Fritz was still full throttle ahead at home. He is not gentle with things and his roughness finds him in interesting positions . . . like sitting atop tables. We were all happy when sleep time came!

One thought on “Fun in the Sun”

A human being should be able to change a diaper, plan an invasion, butcher a hog, conn a ship, design a building, write a sonnet, balance accounts, build a wall, set a bone, comfort the dying, take orders, give orders, cooperate, act alone, solve equations, analyze a new problem, pitch manure, program a computer, cook a tasty meal, fight efficiently, and die gallantly. Specialization is for insects.