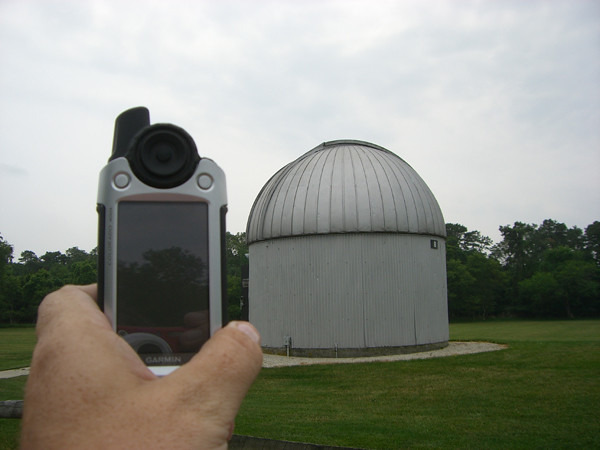 What is the saying about he who hesitates? I have not attended to the Neverending Scavenger Hunt as I should. Thus, I have lost out on many hunts. This is one such one. Rick, who I think played the game extremely well, left in November 2007. Without any warning, temper tantrums, etc. he closed up shop and moved on. He was tired of waiting for attention to the game.

Rick had several good hunts. This was one I just procrastinated on. Today in my adventures I passed Stockton and pulled in. As I approached, I passed security/police. He immediately turned around. I did not look closely; he looked like a trooper, but why would a trooper be on the college’s property? Anyhow, I got right out and explained what I was doing. He smiled and said, “Okay.”

I suspect this is one of the tinier observatories. I haven’t been in one since school. I am one of those who just doesn’t see the constellations. I’ve tried, just failed. I’ll be making another attempt soon enough, I suspect.

Anyhow, thanks Rick for the hunt.

Make every song (you sing) your favorite tune