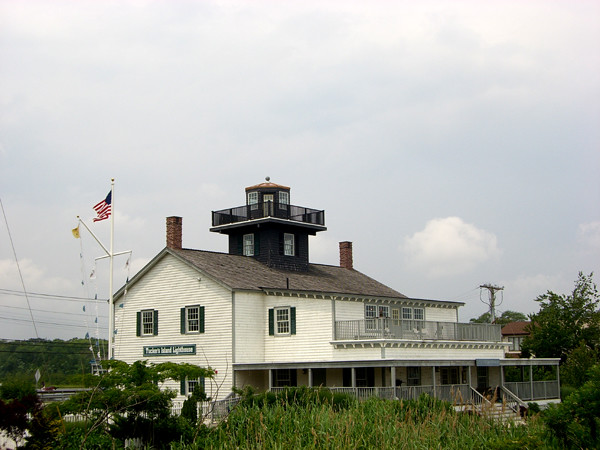 Tucker’s Island Lighthouse is sitting somewhere at the bottom of the Atlantic Ocean. On 12 October 1927 it fell.

Tucker’s Island was an island (d’oh!) off the southern end of Long Beach Island. It wasn’t always an island. Reuben Tucker purchased the tip of Long Beach Island an established a resort there. It was named Tucker’s Beach. After he died, the Atlantic Ocean cut through to create the island; hence, the name change. Since then, Tucker’s Island has been claimed by the ocean.

In the 1980s a group formed the Tuckerton Seaport and built a replica of Tucker’s Island Light. It sits smack dab in the middle of Tuckerton, a lovely little town six miles west of where the original once shone.

There’s much to see and do at the Seaport.

The Particulars
To claim this upload a photograph of you standing in front of the lighthouse with your GPSr. Across the driveway of the lighthouse is a sidewalk leading to the parking lot. The railing has metal stanchions. On them is imprinted Tuckerton and a year. Type the year for the confirmation code.

The way I figure it, this one should count for ten caches. Thanks for the challenge.