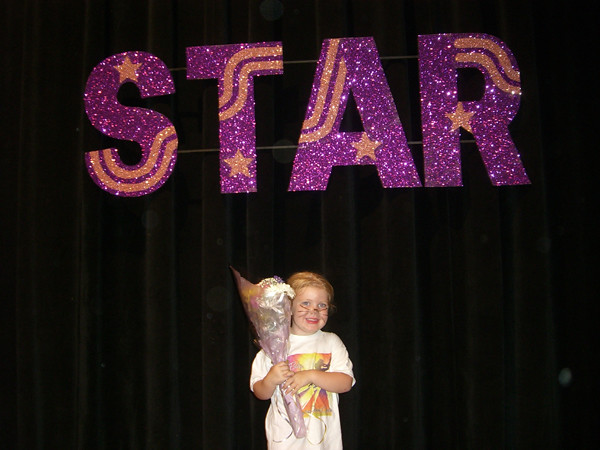 Beetle‘s first dance recital, Baby, I’m A Star, was tonight. This was certainly a spectacle and Beetle shone brightly!

Beetle has been dancing since September (I think). Every Saturday, save one, she attended. We didn’t know when she missed the one practice for Cousin Timmy’s baptism, she lost a trophy for perfect attendance. This is something that has stuck in her mother‘s craw. Grrrr . . .

There were a couple rough practices early on, but Beetle got with the program and genuinely seemed to enjoy dancing.

A month or so ago, the costume arrived. Beetle’s dance is Kitty Kat Rock, and her costume is a kitty costume. She is adorable in it. The song, which the children sing, and the dance are so cute. And when Beetle does it, she is wonderful.

At Thursday’s practice, however, she balked at participating. She was demoted. But she rallied on Friday and was put back in her rightful place: front and center!

The dance company rents out Delsea High School in Franklin Township. The place was full. It was difficult to estimate how many dancers there were for all save Beetle’s class danced multiple dances. There were 35 dances with a 20-minute intermission. A 50-50 raffle was held (winner received $116) and bottled water was for sale. Bouquets of flowers were everywhere. Yes, even Beetle was given flowers.

The event was professionally videotaped. We have purchased a copy (at an usurious price). We will . . . ahem . . . make that available when it is delivered.

All flash photography and videotaping was banned. Gert didn’t even want me to bring the little digital camera with me, but I don’t leave home without it. Little did she know the GPSr was in the other pocket . . . just in case.

With 35 dances and Beetle’s being the 31st, we were in for a long night. Lots of my colleagues have children in the dance studio. We chatted with the district’s building director. He’s happy that New Jersey is borrowing another $3.5 billion without asking the taxpayers. Damn liberal. He’ll be able to build the last school our district wants . . . until the next plan. We waved to other teacher friends we know.

Gert was issued a wristband to permit her into the staging area. Beetle arrived in street clothes. Apparently there was a big party back there with Barbie movies aplenty. Mommy visited at halftime. Beetle was in good spirits.

The dancers are cute, save the adults. There were many different kinds of dancing: tap, ballet, point, interpretive. Most of the music was good and recognizable. Poppy said the only good one was the last (Stars and Stripes Forever). After a while, we recognized the dancers as they kept coming out. Some were better than others. They were featured, it seemed, in the dance.

After intermission the anticipation began to build. Four more songs. Three more. Two more. Finally, the lights went out, the curtain opened, and the crowd exploded! The Kitty Kat Rock was the highlight of the night. The place roared. My were they cute. And front and center was little Miss Beetle rocking and rolling just like she was supposed to do. I managed for just a split second toward the end of the song to run my eyes up and down the line of dancers. Beetle was the only one keeping the beat. That’s my girl!

Unfortunately, this was it for Beetle. The three-year-olds only had one song and it was over far too quickly. Some other children came out and danced. Who cared at that point? The dance finale (the aforementioned Stars and Stripes Forever) had nice costumes, but went on far too long.

Then came the curtain call. Beetle would appear again. First the old ladies came out. Then the high schoolers. Then the middle schoolers. Elementary students. The little ones. And then Beetle’s group. But Beetle was not happy. She looked lost. We kept waving to her and trying to console her from 10 rows back, but something was wrong. She was not the life of the party she had been a few minutes earlier. What was wrong?

The curtain was pulled and Mommy went back to retrieve our star. It took forever for them to re-appear. When we finally saw our little girl, she was in street clothes. Uh oh. It turns out she had an accident immediately prior to the curtain call. The room mothers did not have time to change her and sent her out. 🙁 Our little girl was embarrassed. To her credit, it was now 9:00 and well past her bedtime.

Gert took a photograph of another girl in Beetle’s dance. This shows you what the costume looks like. I think we’ll need to get Beetle into this for a photo shoot.

With the other dancers being in so many dances, it dawned on us, there was a costume for each dance. These costumes are expensive. We only had to buy one. Some girls had many. So many, in fact, they had their own rolling wardrobe. Sigh . . . I can see the dollar signs spinning now.

I was disappointed we weren’t going to get the in-costume photographs, but that was okay. Beetle was just as cute as ever.

Grammy, Poppy, Aunt Kitty, Mommy, and I attended. We left Fritz home alone. No no, Aunt Kim and Uncle Mike spoiled him this evening.

The title of the performance tonight was Baby, I’m A Star. I had Beetle stand beneath Star since she was one.