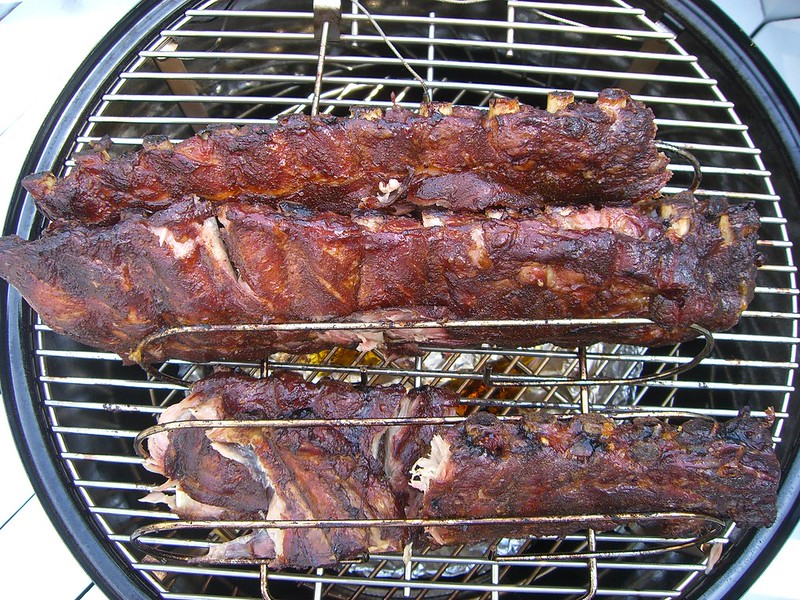 Ah, it’s been hectic today. I fired up the WSM for the first time and cooked three racks of baby back ribs. I used the Best Ribs in the Universe (BRITU) procedure that so many recommend. In the end, all was well and we enjoyed our ribs. It was a bit rough getting there, however.

I had some difficulty removing the membrane from the racks. The first rack went flawlessly. The second rack gave me lots of trouble. The third tore and I had to dig to get it all off.

The directions called for making a quarter batch of the rub. Even that was far too much particularly given how everyone warns to dust the racks, not thoroughly rub the racks. I did use about two-thirds of the salt called for to make certain it wasn’t overpowering.

Starting the charcoal was easy enough. I probably could have filled the chimney a tad fuller. The wood was aflamed easily enough. I let it sit an hour prior to putting on the ribs. When the ribs hit the grill racks, the temperatures confused me. At first I had a probe in the ribs. I shouldn’t have. D’oh! That read extremely hot as in 300°. I knew that couldn’t be right. At the same time the rack temperature read 164°, which is entirely too low. The lid temperature was 225°. Which should I follow?

I stressed for a bit until I got a feel for what was going on. The rack was probably a bit cool, but it rose. The lid held steady throughout. The following are my data:

At the three-hour mark I turned the ribs. One rack began falling apart. I think that is a good sign.

The directions said to begin looking for doneness at the fourth hour. I believe these were done then. The issue is we weren’t ready. Gert wasn’t even home and I was timing the rest of the meal for a bit later. I pulled the ribs at four hours, 40 minutes. I sauced them immediately. Admittedly, all looked really good.

In addition to the ribs I made onion rings. I liked them, but next time I will cut the rings a little bigger. I also need to ensure each ring is well-battered. A couple slipped through and did not hold as well.

After all this, the beans were just from a can. Seeing how all this worked today, next time I need to jazz up the beans. They were a bit plain given dinner. We also had a salad.

The ribs were very good. I would not classify them as the best in the universe nor even the best I have ever had. The ends were a little more done than I would have liked. Nevertheless, I really did enjoy these. There was a nice smoke ring on the meat. I gobbled down plenty of ribs as did everyone else. Even Fritz gave his approval!

Obviously I will be making more ribs. I suspect I will try a different recipe and method next time. Playing around with all this will help me determine the best way to proceed.

Good stuff, this smoking is. 🙂

Corduroy pants
and an old plaid shirt,
Daddy went a walkin’
just to feel the earth,
Got a little dirty
but that’s all right,
Hey now, hey now