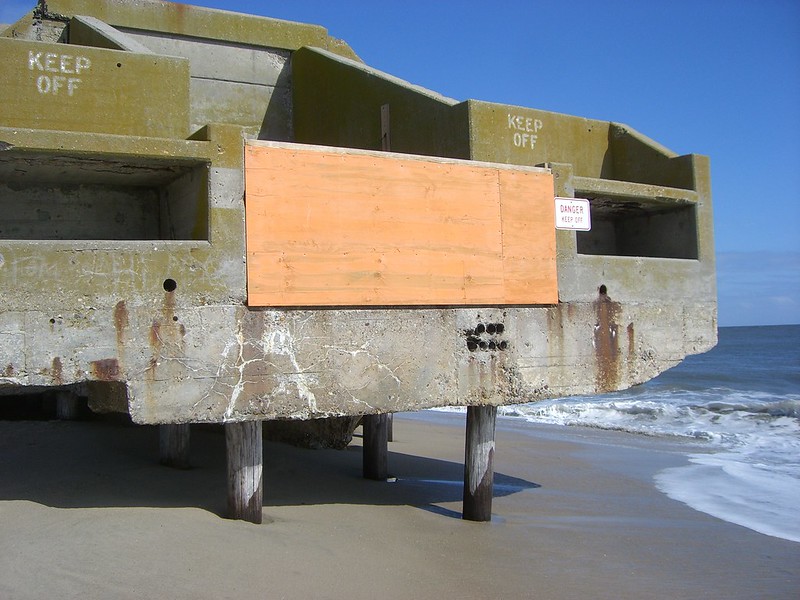 Between the ages seven and 12 I spent a lot of time on the beach here with my friend Jess. It wasn’t far from here that I saw my first real boob. ‘Tis true. Some girls had undone their bikini tops to sunbathe and were not particularly modest when they turned over.

Back then the bunker was as off limits as it is today, but it was not as secure. Young boys like to climb as Fritz demonstrates every day. Jess and I used to climb all over this thing. We even entered the darkness. It was scary but oh so much fun. I believe one would be arrested today for doing that.

This is a munitions bunker built during WWII. It was originally 900 feet from the coast. A few years ago it was in the ocean. Some beach replenishment has helped, but the ol’ Atlantic is encroaching again.

There are multiple approaches to this location. Water would be the most fun, but probably the most difficult. Allow me to suggest parking at the Cape May Migratory Bird Refuge along Sunset Boulevard (no, not the one starring Gloria Swanson . . . good movie, fwiw) at: 38.939570°, -74.950146°.

Things have changed here since 2002 when I placed a cache here. A mandatory donation is required. I find the fee worth it, but I am not certain there is any enforcement. Entering from the beach to the refuge is free so I do not know how they can mandate the donation. Anyhow, the area is replete with migratory birds. You’ll most likely run into lots of birders along the trail. Take the trail to the beach and then the beach to the bunker. One can also park at the end of Beach Drive (38.929938°, -74.934208°) and hoof it a little further along the beach. It makes for a stunning walk. I have spent any number of moonlight evenings along here.

Given the location of the bunker, this is only available from dawn to dusk.

There’s only one direction in the faces that I see;
Its upward to the ceiling, where the chambers said to be.