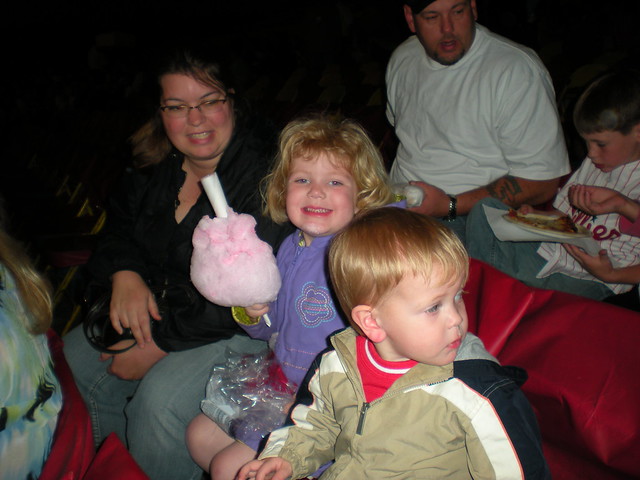 There was a time in my life when I lived spontaneously. It was exciting. Of course, as a family man, spontaneity is more of an idea than a reality. Tonight, however, the unexpected occurred.

While picking up Fritz, Gert called and asked if I wanted to go to the circus. We had discussed that last week but ruled it out. This morning Fritz looked as though he may be on the verge of becoming ill, so any last minute change wasn’t in the cards. But there we were at 4:30 discussing that very possibility. We met at the big tent and headed in.

The Cole Bros. Circus is celebrating its 125th anniversary. I believe my parents took me to see them when I was a young boy. I recall a pony ride outside the tent in the Villas. Anyhow, Gert had taken Beetle last year while I babysat Fritz. This was an opportunity for the little guy to see his first circus. He loved it!

For a rinky-dink circus, I was impressed. The balancing acts, the hair spinners, the girls flying high on sheets, the cannonball flyer, etc. were all really well done. A 10-year old boy did a handstand atop a pyramid on a tightrope. That was kewl!

Sure, the sales pitch was on throughout. Beetle so wanted things and then face painting. We like it when she has her face painted, but a school night does not lend itself to such an activity. Of course, the little one whined and screamed all the way to the vehicles. It didn’t matter that we knew folks everywhere at this event. She doesn’t understand that teachers’ children are expected to be model children. She just loved acting out. Sigh . . .

I was spent of energy but filled with contentedness for the conclusion of a difficult, time consuming, and splendid cache. One of my most memorable cache hunts.

Thanks for placing this superlative cache, well done.

— KBer, log for Take Me Out to Another Ball Game